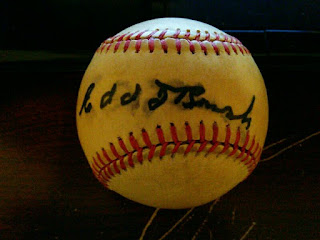 I used the Christmas money that I got this year on some Hall of Fame baseballs that I probably wouldn't have normally bought.  One of which was a ball that I had my eye on for a long time, and was finally able to knock it off of the list.  Presenting my Hall of Fame signed baseball number 119, Edd Roush.

Roush won the World Series in 1919 as a member of the Cincinnati Reds, who were on the other side of the infamous Black Sox scandal.  Roush was elected to the Hall of Fame in 1962 by the Veterans Committee and is the only representative of that 1919 Reds team who has been inducted into the Hall.

As far as Hall of Famers go, Roush is the "oldest" Hall of Famer that I have, now.  He was born in 1893, which surpasses Joe Sewell (born in 1898).  He also passes Sewell in that his career started earlier than anyone else that I have, 1913.  That really blows my mind, to be honest.  Roush's career started over 100 years ago.  He also represents the only player I have (that I know of) who played in the Federal League.  I had never heard of the Indianapolis Hoosiers nor the Newark Pepper.  Those teams also boasted Hall of Famer Bill McKechnie.  The Hoosiers actually won the Federal League Championship in 1915.  Roush also is the earliest World Series winner (1919) that I have.

Roush never struck out more than 25 times in a season and, according to his Wikipedia page, he swung a massive 48-ounce bat and said that he never broke a bat in his career.
Posted by William Regenthal at 9:37 PM