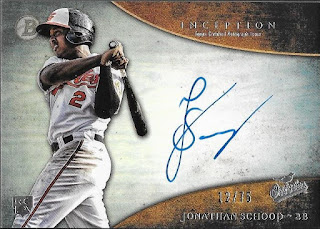 I completed a trade last month with a guy from Instagram named Alex.  I sent him something that I can't quite remember (I think it was a Bowman Sterling auto) in exchange for this awesome Jonathan Schoop auto from 2014 Inception.  Inception is such a good product, but the Orioles haven't really had a whole lot of major prospects come through that set, with the exception of Schoop, Hunter Harvey and Christian Walker.  I'm hoping the Orioles recent draft picks start to show up in products like this.  Also, I can't wait to see stuff of Trey Mancini and Chance Sisco in this stuff as well, 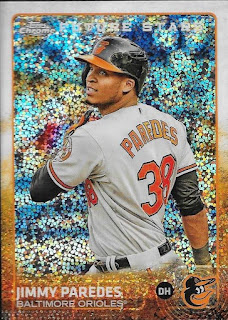 Alexander included some extras in the package as well.  They were a few Orioles cards, but the most notable was this Jimmy Paredes sparkle chrome from Topps Update.  I wish Chris Davis had one of these this year, because I would be all over it!  This card just looks so cool.  It's too bad Paredes tailed off after the All Star break, because he was on pace to have a pretty special year last year.  I hope he can bounce back.  We'll see though.

Thanks for the deal, Alexander!  I wish I could remember what I sent, but I'm sure you were happy with it.
Posted by William Regenthal at 7:11 PM