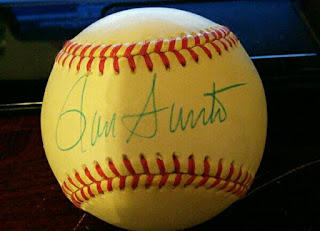 The last of the baseballs that I picked up with my Christmas money came in the form of this Ron Santo signed baseball.  I was able to pick it up with the Christmas money that I got from my grandma, and the ball turned out to be quite a steal.  It is a William White ONL baseball with a PSA auction letter.  I got the ball from Ebay, but the seller picked it up from a frequent shopping destination of mine, Collectauctions.  I actually looked at the lot that this ball was included in, but I declined to bid on it.  I ended up with one of the balls anyway!!

Santo was elected to the Hall of Fame in 2012 (posthumously) by the Veterans Committee.  He probably should have been elected a long time ago, especially since he passed away due to diabetes complications in 2010.

Santo is the 121st Hall of Fame signed baseball in my collection.  Hopefully, based on the voting results to be announced Wednesday, I will be able to count ball number 122 soon!

Thank you for the Christmas money, Grandma!
Posted by William Regenthal at 6:13 PM