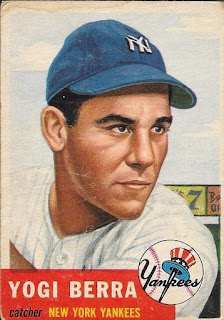 I finally got a chance to visit my brother in Columbia, SC after almost a year.  I try to get down there a few times a year, but last year, I was only able to get down there for the crawfish festival in May.  We went down there to hang out, since it had been a while, and also to get out of town for a bit.  The drive down wasn't bad at all, even though there was a winter storm a little farther west of where I was.  It was cold as crap all weekend, though.

As always, I made sure to visit Conrad at Chic Antiques while I was in Columbia.  I emailed him ahead of time so he would have an idea of what I was looking for.  This time around, though, he wasn't able to locate any of the Hall of Fame baseballs that I had on my mind.  That made it easier for me to focus on cards, however, and I was able to knock a nice chunk out of my 1969 set while I was there (will be shown in a later blog post).

Since I didn't get a ball, I got some nice vintage for a few friends of mine.  Aside from the 1969s, I only took home two vintage cards for myself.  The above 1953 Yogi Berra was one that I have seen there a few times, but haven't bought.  Finally, I took the plunge and added it to my collection.  It is a really cool card and I am glad to have it alongside the rest of my Berras.  I think 1953 Topps is a very underrated set.  I have a couple of the big name cards, with the Satchel Paige, Berra and a couple others.  The Mantle is ridiculously priced, but otherwise, this may be a nice set to work on here and there at some point. 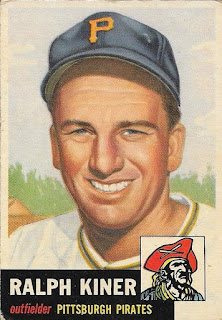 Speaking of 1953 Topps, I added another with this nice Ralph Kiner.  Conrad pretty much did a buy one, get one free on these.  For the price he had the Berra listed, I paid that price for both of these cards.  I don't know which card looks better, Berra or Kiner, but I do enjoy the old school Pirates logo on this one.

I intend to start up another 50s set sometime soon, and Conrad has been enlisted in helping me get started.  I doubt it will be 1953, but I do look forward to the day when I can work on this one.  I think they are beautiful cards.
Posted by William Regenthal at 5:36 PM