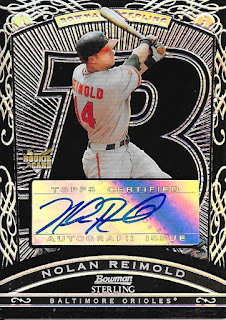 My buddy Michael's Christmas gift came yesterday and when I opened it, I was blown away.  I posted a couple days ago about how I had six of the 2009 Bowman Sterling Nolan Reimold autographs and I was going to be looking for the gold parallel sometime soon.  What I didn't know, however, was that there was a black parallel!  I may have seen one back in 09 when these came out, but I had obviously forgotten them.  This card looks awesome.  It is numbered 9/25 and is in amazing condition.  I plan on picking up a magnetic case soon, which is where this will reside. 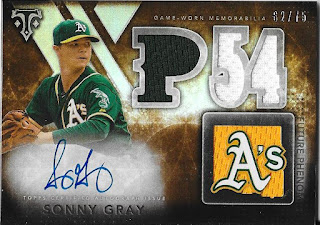 Not to be overlooked, Michael also included this awesome Sonny Gray triple relic/auto from 2015 Triple Threads.  This one is numbered 62/75 and also looks awesome.  It will also be put in a magnetic case.

Michael really blew me away with his gifts.  He didn't have to go above and beyond for me, but he did.  I really love the gifts!
Posted by William Regenthal at 6:34 PM