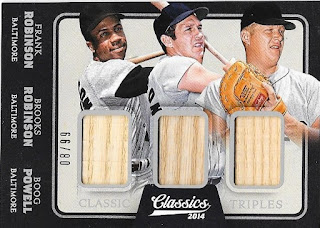 I got a package in the mail from my friend Dylan for Christmas and was really happy with what he included.  He also had something in there for my son, Chris, which was really nice of him to do.  In the package was a nice page-long note and two baseball cards.

The above 2014 Panini Classics triple relic of Frank, Brooks and Boog was one I didn't have in my collection, yet.  It is numbered 8/99 and looks really cool.  I knew it was coming, because Dylan was afraid that if he got me something, I would already have it.  I have heard that issue before, but I don't know why someone would think that............. 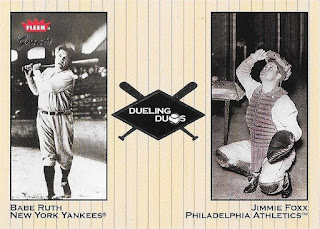 Dylan also included this Ruth/Foxx card, which I needed for my Foxx PC.  Not bad.  He doesn't have a whole lot out there, so it was nice to be able to add it.

Thanks so much for the gift, Dylan.  Chris also loved his gift.  I appreciate you thinking of us!
Posted by William Regenthal at 3:07 PM