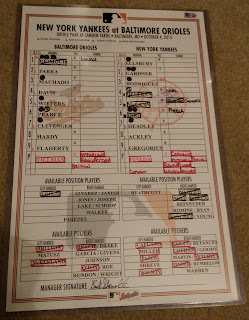 The piece I was most excited about that I picked up from Fan Fest was this game used lineup card from the Oct 4, 2015 game against the New York Yankees.

If you remember, that was the final game of the 2015 season and also the game that Chris Davis hit two homers, his final ones as an Oriole.

I was at the game with my son, Chris, and my friend, Michael.  We were seen on mlb.com and also MASN after Davis hit the second homer.

I had seen the game used lineup card box at the Orioles authentics booth at Fan Fest, but I was looking through game used hats because Michael told me that there were some Reimolds in there.  I didn't find those, but while I was doing that, I asked Chris to look through the lineup cards to see if any of the October games were in there.

He told me that he didn't see any, but I decided to take a look anyway, and I found this.  I checked the box score on my phone and found that this was from the final game.  I was so excited, I bought it on the spot.

I plan on putting this up with a copy of the screenshot of me celebrating the home run (from mlb.com) and a copy of the box score.  I think it'll be a bit expensive, but will look cool when it is done.

If you look closely, you'll see that it is signed by Buck Showalter, which is an added bonus.
Posted by William Regenthal at 7:24 PM