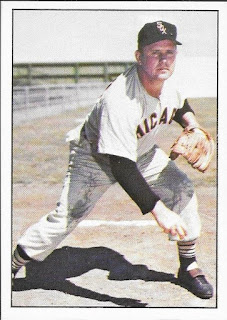 It has been a while since I have picked up a new Virgil Trucks card for the PC.  When I was doing my Black Friday shopping, I grabbed this 1979 TCMA Virgil Trucks since it was really cheap.  I wish he was one of those guys that Topps would include here and there in some of their products.  Trucks might not have been a superstar, but the hardcore card collectors would get a kick out of pulling a piece of game used jersey or memorabilia of Trucks from a pack.  I know I would.

He was one of a kind.  To think, it has been over 5 years since I first "discovered" Mr. Trucks.  All because my buddy Drew was helping me figure out which players were good at TTM signing.

I still wish I had taken him up on his offer of paying him a visit in Alabama.  That would have been really cool, but probably still awkward.  I ended up doing a trip like it, meeting someone with old ties to the game, and had a blast.

I wonder if an opportunity like that will ever pop up again.  If it does, I know I will jump at the opportunity without any hesitation.
Posted by William Regenthal at 8:41 PM