Julie Sends the First Holiday Package of the Year 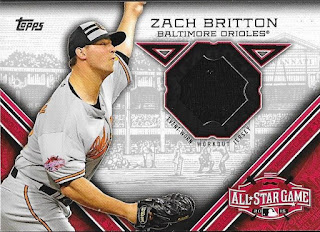 I got my first holiday care package of the season in the other day from Julie.  She writes the fantastic blog "A Cracked Bat".  She was nice enough to include some really good cards.  The above Zach Britton relic from 2015 Topps Update was a nice addition to the collection.  The Orioles were kind of a middling team this past season,  but they still had 4 all stars.  Not bad!

I need to see if the other All Stars have relics.  Those would be nice cards to pick up. 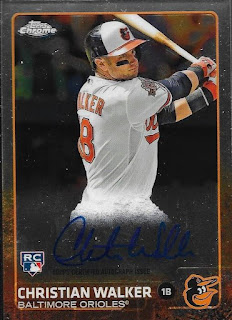 Julie included this base auto from 2015 Chrome of Christian Walker.  I need to try to get the color parallels of Walker's 2015 autos, but that is something I will do later on.  Walker is a good player, but I would be completely ok with him playing this season at AAA Norfolk.  Especially if that means that Chris Davis will be coming back.  Come on guys, sign the man! 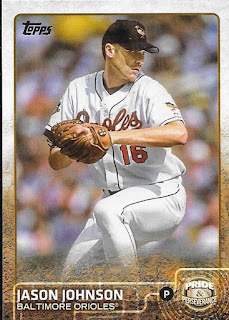 Finally, Julie sent me this really nice insert from 2015 Topps of Jason Johnson.  Johnson doesn't have a whole lot of cards these days.  He is significant for me because he was the first ever player I got an auto of IP.  He was really nice at the time, and I always hoped that he would pitch well for the O's.

Thank you so much for the care package, Julie!  I really appreciate it!
Posted by William Regenthal at 4:22 PM