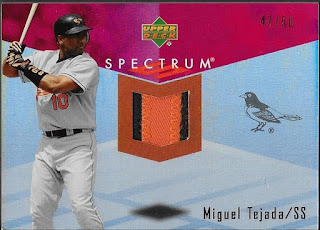 I got a package in the mail that was waiting for me to open the day after Christmas.  It was among 3 packages that were there, this one being from my good friend, Ryu.  Inside the package was a nice note from him, and this 2007 UD Spectrum Miguel Tejada patch card.  The card is numbered 47/50.

I was a fan of Tejada when he was first signed as an Oriole; and he had several good seasons for them, but then I kind of soured on him toward the end of his deal.  He seemed really pouty at times, and was pretty much the star on some terrible Orioles teams.  Add into it that he was named in the Mitchell report a day after he was traded away to the Astros, and also the ESPN interview where they surprised him with his real birth certificate (making him 2 years older than he was listed).  I actually felt really bad for Tejada at that moment.  I forgave him for a lot of things during that interview, and really began to sour on ESPN themselves.  Just my opinion, though.

All of that being said, I have two Tejada cards that I cherish.  One was given to me by an old friend, and this one given to me by my buddy, Ryu.  It is a beautiful card with a really nice patch.  We all know how I love patches.

Thank you so much, Ryu!
Posted by William Regenthal at 4:54 PM