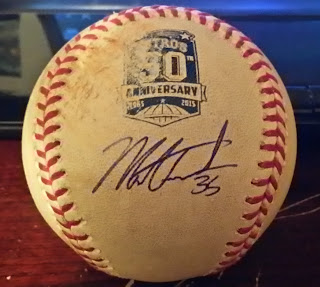 I have been talking a lot lately to a really awesome guy in Texas named Nick.  We have traded a few times, and chatted some, but recently, we decided to talk a lot more.

What started the whole thing was when Mark Trumbo was traded to the Orioles, Nick messaged me saying he had this Trumbo signed baseball and he wanted to know if I was interested.  I wasn't too interested at the time, but told him that I would think about it.  A week or so later, Nick messaged me again saying that he really wanted the ball to go to me,   So, I asked him what it would take to get the ball and we reached a deal really quickly.

The ball is really cool, it is a game used foul ball that Nick caught, and it is a commemorative ball of the Astros 50th season.  I am getting to where I really like these commemorative baseballs.  I have been getting quite a few of them, and I think that is really where the appeal was in this one.  That, and Nick was really awesome about the trade.  So much so, we became very good friends following our discussion. 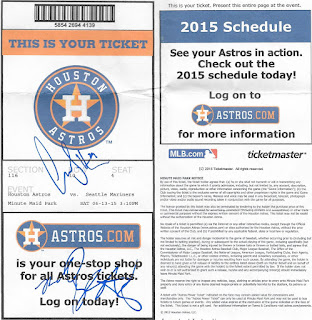 Generally, when I am sending out a trade package, I try to include some extras.  I wanted to do that with Nick, since he was so nice, and also because it is Christmas.  I told Nick that I was going to include some extras for him, and he told me that he had already gotten some together for me.

When the package came in the mail, I was blown away.  Oftentimes, I will get to chatting with someone and feel like we hit it off, and folks would promise tons of stuff, only to have everything kind of die off soon thereafter.  Nick, though, really blew me away with what he "threw in" to the package.  Not pictured was a stack of Topps gold parallels that he included, two of which were 2014 Topps mini golds of Bud Norris and Dylan Bundy.

The above signed ticket  was from a game he attended (I think he said 6/13/15, and also the day Trumbo signed the ball, I believe); the ticket is signed by Carson Smith.  I don't remember who he told me signed the bottom of the ticket.  Maybe he will read this and comment. 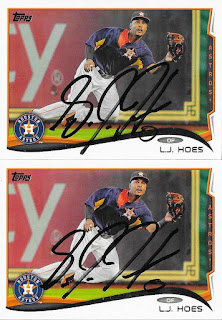 Nick included these IP autographs of former Oriole-now current Oriole- LJ Hoes.  Hoes was a pretty decent prospect for the Orioles, but was traded to Houston in 2013 for Bud Norris.  Now he is back and is looking to make the team out of Spring Training. 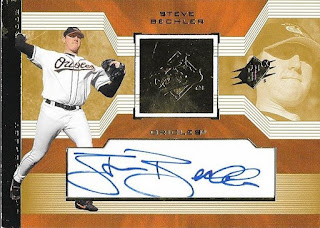 I don't know if Nick knew this or not, but this Steve Bechler auto is tough to get.  Bechler was the pitcher who passed away in Spring Training 2003.  His death is the reason why ephedrine is now banned in baseball.  I remember when it happened, and it is still a really sad story.  I really appreciate Nick including this in the care package.  I think I have one other Bechler auto, and I was hoping to add some more over time. 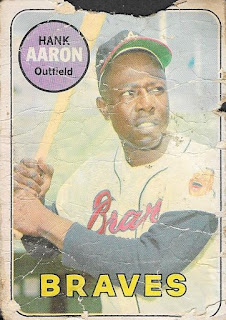 Finally, here is a card I really enjoyed that Nick included.  Don't laugh, I'm serious.  This "well loved" 1969 Topps Hank Aaron appears as if someone ran it over a few times, dropped it in a puddle, then kept it as a wallet card for about 10 years.  The card would probably grade lower than a 1.  Maybe a 0.5?  However, since one of my favorite blogs is POBC (Poor Old Baseball Cards), I really think this card is cool.  I have quite a few POBCs, and this one now probably takes the top of the list.  I may actually make an album sometime with the ones that I have.  Nick might have thought sending this was a bit of a joke (and trust me, the kid is so very funny), but really, I LOVE this card.

Thank you so much for a great trade, an amazing care package and beginning of a really nice friendship.  This stuff really blew me away, and I can't thank you enough, Nick!  If you are on the Instagram, you can give Nick a follow as baseballcards035.
Posted by William Regenthal at 9:16 PM