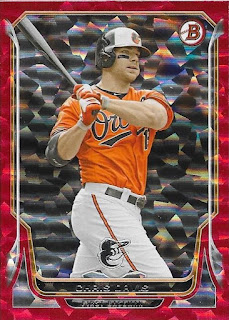 I bought a bunch of gifts for people with one Black Friday purchase on COMC.  I went back to the site later during their sale, after I sold a few things, and bought myself some cards.  One of them was this 2014 Bowman Red Ice Chris Davis that I needed for the 2014 rainbow.

The card is numbered 19/25.  I had a chance to get one when it first came out, from my friend Noah, and I mistakenly told him that I already had the card.  This event is what actually prompted me to start my Davis spreadsheet on the blog.  Since then, I have been diligent in updating it, and it has come in handy when I have gone to make a Davis purchase.

I was disappointed that there weren't as many of the cool parallels in this year's Bowman offering.  I was equally as disappointed that Davis wasn't included in Bowman and Topps Chrome.  Oh well, I'm certain he will be in 2016, I just hope he is in an Orioles uniform.
Posted by William Regenthal at 7:09 PM