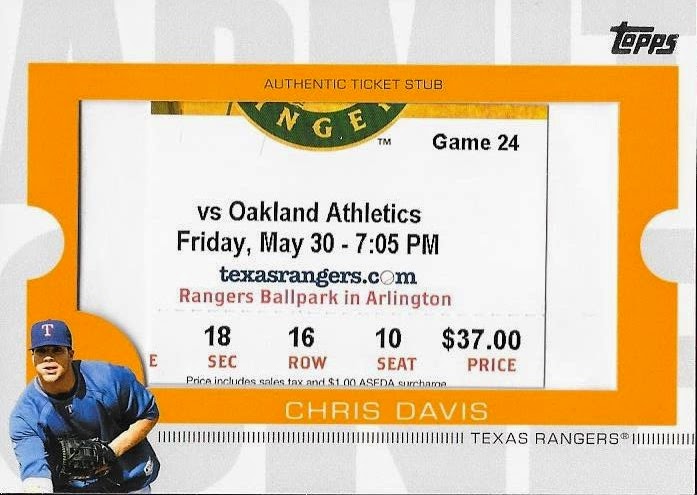 I sold a Jake Marisnick auto that I had on my COMC page for $18.00 during the Black Friday weekend sale.  One of the cards I got took a big chunk out of the store credit and with what was left over, I picked up this 2009 Topps Ticket To Stardom ticket card of Chris Davis.  Pretty sweet, right? I thought so.  I do think the card is cool, but when I originally bought it, I thought it was a piece of the ticket to the game where Davis made his MLB debut.  Wouldn't that be awesome. 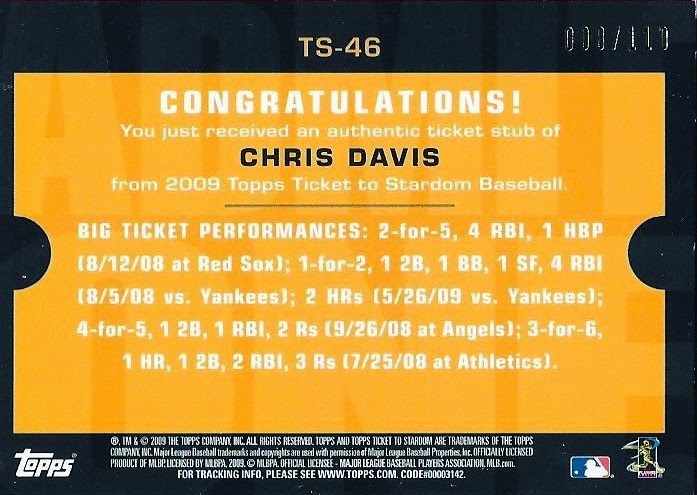 Take a look at the back of the card.  For those who may not be able to read the back, it says: "Congratulations, you have received an authentic ticket stub of Chris Davis from 2009 Topps Ticket to Stardom Baseball..."

What, exactly, does this ticket stub have to do with Chris Davis?  If there are any Rangers fans (P. A., Judson) who can help me out with this, I'd appreciate it.

I don't want to slam the card, it's damn cool, but I just think it's odd to have a random ticket stub from a random game that the player didn't even play in.  It would have been amazing if I had gotten the one from his MLB debut (and at the $4.00 price I paid).  Oh well, I do like the card, and I'm adding it to my Davis PC.  I guess I'll need to see if there are ones from his debut.
Posted by William Regenthal at 8:22 PM