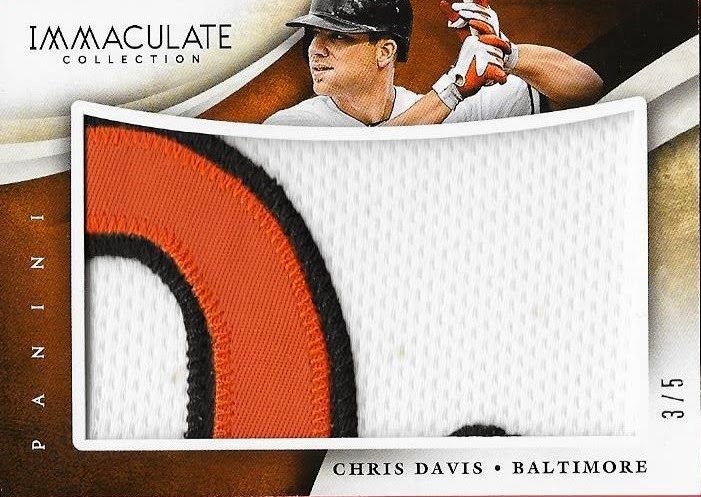 I remember saying last year that I wished I had more "sick" patches in my collection.  A year later, I now have a ton.  While I really don't like the term "sick" patch anyway (I mean, the patch didn't barf Ebola all over the card, now, did it?), I do enjoy the patch relic and have decided in my mind that I enjoy them probably more than I do an auto.

I saw this Chris Davis 2014 Panini Immaculate Collection patch on Ebay for $39.99 and jumped all over it.  The card, as you can tell, is numbered 3/5 and looks awesome.  It is hard to tell on the scan, but the jersey has a few faint dirt spots on it as well.  Pretty cool.

Between what I have seen from Immaculate, it looks like a really nice product (that I probably can't afford to buy), much like Museum Collection from Topps.  I know how some folks like to bash card companies who put out this high priced stuff and how they are keeping the little man down, but hey, I'm ok with the loaded folks opening the product and offloading it to Ebay.  I can search what I'm looking for and buy the card I want for a reasonable price instead of shelling out a couple hundred bucks on a box, only to get a Mark Prior relic.
Posted by William Regenthal at 5:27 PM