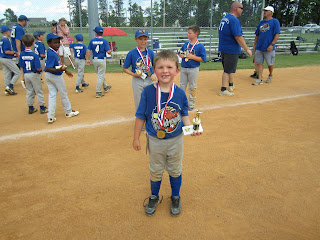 I always have folks remark to me about how passionate I am about baseball, I must have played it.  Well, I played two years as a kid and I can admit that I was terrible.  It has always been tough, loving the game so much, but not having a chance to play.  So, I took to writing about it, which I definitely enjoy.  I never wanted my son, Chris, to feel like I was forcing him to play ball because it was something I loved.  I wanted him to play because it was something he wanted to do.  So, 4 years ago, when he asked if he could play t-ball, I signed him up, but told him that if it got to where he didn't want to play anymore, I wouldn't force him.  Just as long as he finished out his commitment to the season.  Well, 4 years later, Chris is still playing.  The kid loves baseball.  He loves to play it and has already surpassed everything I did on the field.  In the two years I played, we had really good teams, but we lost in the championship game both seasons.  Today, Chris' team, The RockHounds, won the championship tournament.  They had already won the regular season outright (and the preseason tourney as well), but this afternoon they took home the gold, so to speak.  Chris was so happy that he and his teammates were able to celebrate a win after a long season and two grueling games today.
The coaches he had this year were amazing.  Chris made so much progress from the beginning of the season until today.  He also made friends with the 12 other guys on his team.  They all rooted for each other.  There were no egos, just kids enjoying the game and having FUN.  I am so proud of all of them.  This season was the most fun I have had in all the years we have done this.  I hope he can be on the same team with some of the guys next year, but of course, I know a good many of them are moving up to the next level.  I learned just recently, that Chris was one of the youngest kids on the team.  I mean, I should have known it, but I guess it never occurred to me.

Anyway, I know I'm rambling.  I'm just so proud of the team, and especially, my son.  His trophy is sitting atop my china cabinet for now, but I want to get him something special made with his trophy, uniform, etc, but I have to save for it.

Congratulations, Winterville RockHounds, the best team did win today and I am proud of all of you!
Posted by William Regenthal at 10:29 PM