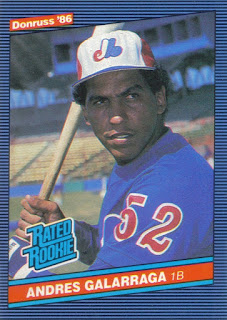 I went to visit my parents' recently and spent a little bit of time across the street at my brother's house showing him how to work Ebay and how to look up my blog.  I hope the lesson stuck.  Anyway, on my way out the door, John gave me the above 1986 Donruss Andres Galarraga RC.  I have always liked the design of 1986 Donruss.  I actually own the 1986 Donruss Highlights set, but that is a copper colored set as opposed to the blue you see above.  This card is in great shape, as my brother is a real stickler for condition.  He had 2 of the Galarragas, so he was ok with parting with this one.

I definitely have to thank my brother for this RC of The Big Cat.  I always liked Galarraga.  He won a lot of Sega baseball games for me.  I played a season on one of the games as the Rockies and I think he hit over 100 home runs for me.
Posted by William Regenthal at 5:46 PM