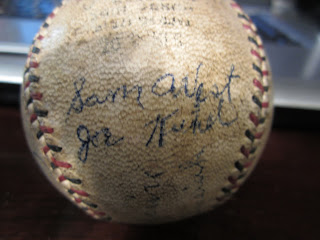 Kuhel only appeared in 18 games for the 1930 Senators, so it is looking like that information may push the time the ball was signed toward the 1931 season.  He was on the Senators with Cronin and Sam West from 1930 to 1932.  That definitely narrows the time frame down.