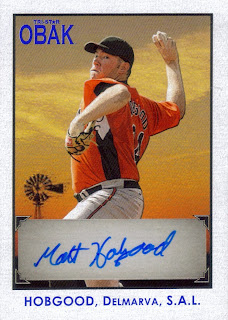 I took another item off of my wishlist with my recent COMC purchase in the above 2010 Obak Matt Hobgood auto.  I met Matt Hobgood back in 2010 when he was playing for Delmarva against the Greensboro Grasshoppers in Greensboro.  I tried to get his autograph after the players were coming off of the field, but I just missed Hobgood.  I left the stadium and noticed the team bus and tried to hang out there at the sidewalk.  Steven Bumbry, son of Oriole great, Al, was nice enough to remember that I had been trying to get Hobgood's autograph on a baseball, went on the bus and told Hobgood that I was trying to meet him.

Well, Matt came off of the bus and talked to me for a minute and signed my baseball for me.  He was only 18 or 19 at the time, but had the professionalism of a seasoned vet.  He is a really nice guy and I have prayed so hard that he have a successful MLB career.  He has struggled with a shoulder injury since he was drafted, but this season he appears to be healthy and is pitching well out of the bullpen for Delmarva.  I really hope he gets a promotion to Frederick so I can see him pitch against the Carolina Mudcats and maybe say hello again.

If I ever do another blog interview, he is definitely on my short list of potential subjects that I would like to interview.
Posted by William Regenthal at 9:38 PM