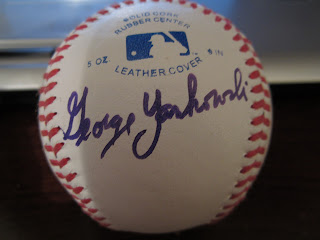 I received this TTM success last Saturday, June 1, 2013 after completely forgetting that I had even sent it.  I mailed to George Yankowski on April 4, 2013, making him an almost 2-month TAT.  I got the ball signed with no fee.

As I always try to do with my TTM requests, I asked a few questions in my letter, which Mr. Yankowski actually answered.  I asked him about playing on the same team as Eric McNair.  Since I McNair's son and grandson, I try to get them some information regarding his playing days.  Here are the questions I asked and Mr. Yankowski's response:

Did you interact with Eric McNair much/at all in your brief time with the A's in 1942?
Eric was a fine man & good ball player and older than I was - the younger players usually hung out together.

What do you remember most about playing for Connie Mack?
Mr. Mack was very patient with the younger players.

Did you keep any mementos from your playing days?
Just memories.

Do you still watch/follow baseball today?  If so, which team?
Boston Red Sox

So, I was really happy to get this, my 74th TTM success.
Posted by William Regenthal at 7:13 PM