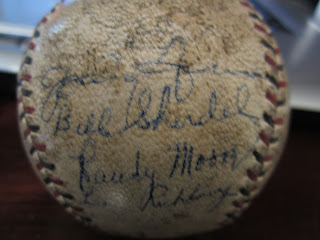 The signature is on the top of the side panel, above Bill Sherdel.  Something that doesn't make sense is that this signature is with all Boston Braves players, so it would make sense if it was a Braves guy, but I couldn't find anyone who matched up with the signature.  I looked at comparable signatures of Hayes and it doesn't quite fit.  Kind of like when you are putting a puzzle together, you think you have the right piece, but you have to use a hammer to get it where you think it should go. 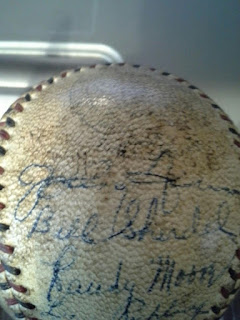 Here is a look at the signature, a bit closer than the other pic and I still can't really tell with great certainty if it is or is not Hayes' signature.  I guess I will call it his until proven otherwise.

This is the last signature on the ball.  I figured out that it was signed between 1930 and 1931 by players form both the Boston Braves and Washington Senators.  I don't know if it was signed at a Spring Training game (since the Braves were NL and the Senators were AL and there was no Interleague play those years and those teams didn't meet in the World Series.

The only Hall of Famer on the ball that I know of is Joe Cronin and his signature doesn't completely match his later offerings, but it is reasonable to assume that his signature could have evolved over time and you also have to account for any fading that could have occurred in the 80+ years since the ball was signed.

The ball came with an auction LOA fro JSA Authentication, and the Cronin signature was listed as authentic, so I don't doubt it.  I can take this ball now and have JSA certify the rest of the signatures as well as try to confirm with them the Hayes signature.  I feel that if I did this, and after doing all of the leg work identifying the other guys on the ball, I have increased the value of the ball substantially.

I had a lot of fun figuring out who all was on the ball and learning about players from that time.  There were a ton of Hall of Famers who COULD have been on the ball, but it was kind of nice to take a look at some of the other guys who played then.

I hope you all enjoyed this series as much as I did.  I hope it wasn't as boring as it could have been.