My Thoughts on 2013 Panini Team USA 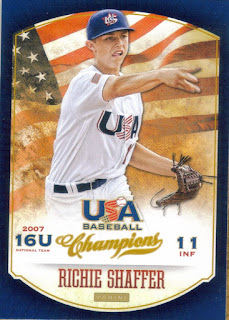 I went to the card shop recently and noticed some new stuff on the shelves in the form of 2013 Panini Team USA.  I bought something like 6 packs of them figuring that one of my good friends who loves Team USA would like them, even if I didn't.  Well, I was very pleased with Panini's offering this year (which seems to have become the norm).

They put in a good mix of past Team USA players in with some of today's prospects.  The above card of Richie Shaffer is significant because my good friend Corbin went to high school with Shaffer.  He is from Charlotte, NC and played at Clemson.  He was a first round pick (25th overall) by the Tampa Bay Rays in 2012 and is playing for the High A Port Charlotte Stone Crabs.

I definitely will be picking up some more Team USA packs.  I might go for the set at some point, we'll see.  I might trade some of the cards I pulled.  There was a Barry Larkin in there that might be sent away.  Some other veterans as well.
Posted by William Regenthal at 11:53 PM