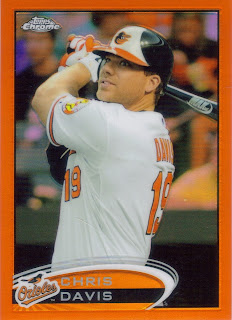 Chris Davis is having quite a season for himself.  After last night's 2-home run game (his third of the season), Davis has reached 30 home runs before the All Star break.  He tied the Orioles record, with Brady Anderson's 1996 performance, for most home runs before the All Star break.  I have been gathering as many Chris Davis parallels as I can since I'm sure there will be a spike in the cost of his cards soon.  I got 3 new cards off of COMC with my latest purchase, two parallels from 2012 Chrome and the 2013 Topps blue sparkle.

I think the Orange parallel looks really cool scanned, especially since the orange matches up well with the Orioles' uniforms. 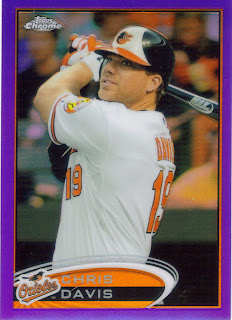 The purple parallels are really cool as well, of course.  I also have his black parallel and X-Fractor, so I am doing pretty well with his 2012 Chrome offerings.  If anyone has any 2012 Chrome parallels that I'm missing, please let me know. 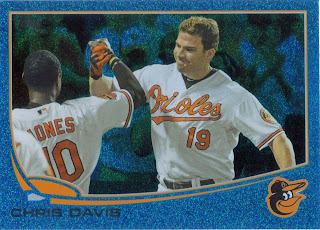 Finally, here is the 2013 Topps blue sparkle parallel.  I also have his Silver Slate, but I need to add his Emerald (I have one for my set), the black parallel, gold parallel, etc.  I also wouldn't mind a printing plate.  Not to mention Pink and Camo parallels too.  Yikes, there are too many parallel cards to chase, it makes my head hurt.
Posted by William Regenthal at 9:21 AM