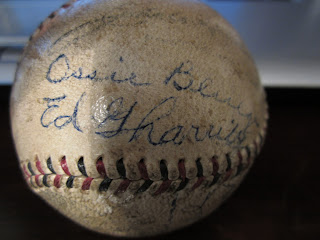 Bluege was named the Senators Farm Director in 1948, serving in that position until sometime before 1958.  During his time as Senators Farm Director, he was resposible for scouting and signing Hall of Famer Harmon Killebrew.  Bluege would serve in some capacity with the Senators and later the Twins (after the Senators relocated to Minnesota in 1961) for 50 years, retiring in 1971.
Bluege appeared on the Hall of Fame Ballot 6 times (1948, 1949, 1954, 1956, 1958 and 1960) but never garnered more than 1.7% of the vote.

Bluege obviously ties in well with all of the other Senators on the baseball, having spent his entire career there.  Interestingly, he was also teammates with several Hall of Famers over his career: Walter Johnson, Bucky Harris, Goose Goslin, Sam Rice, Joe Cronin, Stan Coveleski, George Sisler, Heinie Manush, Rick Ferrell, Al Simmons and Early Wynn.  Just imagine the stories he would be able to tell.