It sure has been a while.  I have finally knocked another Hall of Famer off of my want list.  My 64th Hall of Fame signed baseball is that of Joe Sewell, the hardest player in history to strike out.  He once played an entire season and struck out only 3 times.  WOW. 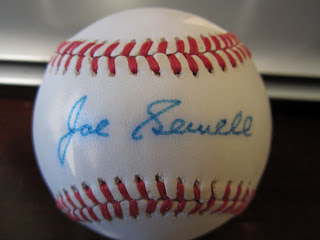 Sewell was an amazing player who, at first glimpse, doesn't blow anyone away with his numbers.  His strikeout numbers are epic, though, and deserve recognition.

Some other random thoughts on Sewell:

I just thought some of those random facts were interesting.  I hope you all enjoyed seeing this signature, as I was excited to finally add another to the china cabinet.
Posted by William Regenthal at 6:10 PM

Joe had a great signature. Thanks for all the interesting trivia too!

Wow look at that signature!