Cross it Off The Bucket List, I Met Cal Ripken, Jr.

You read it right.  I met Cal Ripken, Jr. today.  I checked my email and saw a headline in the local news section that said "Ripken, Jr. Will Vivit Greenville Tuesday."  So, I checked the article and it said that he was due in town to dedicate the refurbishment of the special needs ballpark in Greenville as part of the Cal Ripken, Sr. Foundation.  The ballpark, Sarah Vaughn Field of Dreams is a ballfield built so that special needs kids and adults can enjoy baseball and softball games. 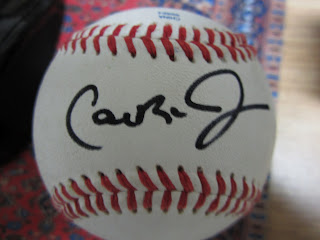 I called my wife and told her that we should try to go to the dedication since it is highly unlikely that Cal would be anywhere near here anytime soon.  Also, since our son Chris is out on spring break this week, I thought it would be something cool for him to attend. 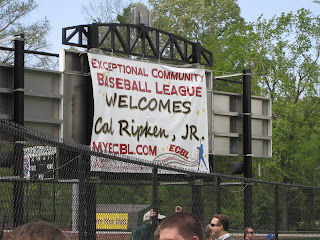 We got to the dedication early with the hope of catching Cal as he got out of his car.  We did catch him getting out of his car, but he went right into the event without signing anything.  He did speak to me when I asked him to sign my ball, which was really cool.  He couldn't sign at that time because he was a little late for the event. 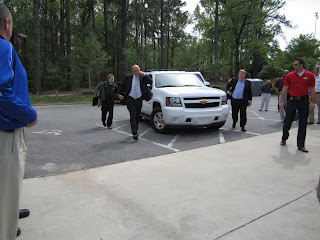 Finally, after the event was over and Cal signed for the VIPs inside the fence, Cal made his way back to his rental car with his handler.  He was apparently on a tight schedule, as the handler told us that Cal would not be signing.  Cal then reached down and grabbed Chris' ball to sign it. 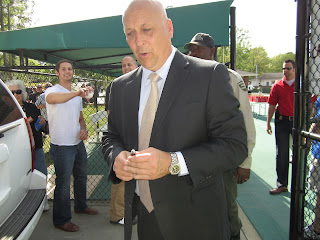 I know this isn't the most flattering picture of Cal, but hey, I met him in person.  I'm going to take what I can get. 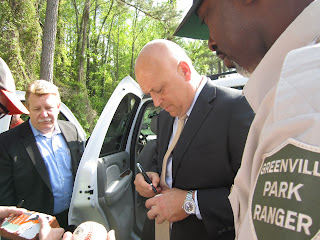 Chris' ball was the first thing Cal signed as he was exiting the park.  He signed 2 more items for other people.  I had my ball held out in hopes of getting him to sign it, but I wasn't as lucky as Chris.  It doesn't really matter, though, because I already have 2 signed baseballs from Cal.  My whole point of going was to hopefully meet him and I did.  I also hoped that Chris would meet him and get a ball signed, which we also did.

To me, this was a big moment.  It was also special because I could share it with my wife and son.  Chris doesn't really get the importance that Cal holds for me, but in time, it will be meaningful for him.  I'm still in awe that I was finally able to meet the player that I have idolized for the past 20+ years.  Another really cool part of it was that  was able to call my mom immediately after and tell her.  Mom, more than anyone, knows how much and how long I have loved Cal Ripken, so that was another cool moment.

I hope you all enjoyed this, because I am definitely excited.  I doubt it will hit me until much later that I finally was able to meet Cal.  Oh man.  So awesome.
Posted by William Regenthal at 6:29 PM

Awesome - When I got home I saw that Cal was in Greenville and I told Brandi - I really hope William got to meet him. Great story! I'm happy for you!!!

Good for you, William!! That's an awesome thing to be able to do.

Awesome dude! At least you were able to speak when you met him for the first time. I was so starstruck I couldn't mutter a word.

Pretty sweet. I was fortunate to meet Cal several times in spring training at Twin Lakes Park in Sarasota. Almost always willing to talk and sign autographs. I must have gotten his autograph five or six times. Those were the days. ...

Congrats on getting to meet The Man. I have yet to have the pleasure, but hope to someday.