Corresponding With The Son of A Former Big Leaguer

I have been reading a book that I bought from Schuyler's bookstore (Merritt Books) about Jimmie Foxx called Jimmie Foxx: The Pride of Sudlersville.  In the book, Foxx's career is discussed through the author's collection of personal interviews with Foxx's family and various newspaper and magazine articles, etc.  One of the players mentioned in the book was Eric McNair, who as a rookie in 1930 won the World Series with Foxx and the Philadelphia A's. 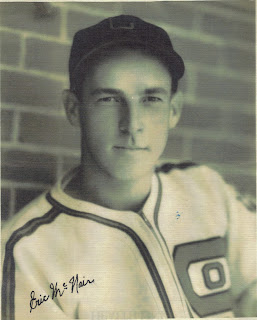 I got a phone call as I was driving to a site one morning from one of the state regulators that I have to work with.  I was wondering why he was calling me from his cell phone, as opposed to his office phone when he informed me he was calling me from his vacation to see his wife's family in Meridian, Mississippi.  He told me that his wife's family was close friends with a man whose father played baseball back in the 30's and had won a World Series with the Philadelphia A's.  He then told me that the man they knew was named Don McNair, Jr., I knew that the player he was talking about was Eric McNair. 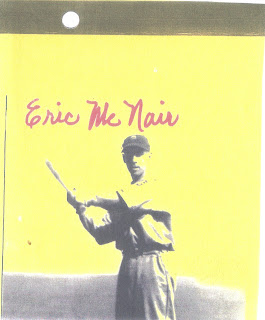 My friend got me the address of McNair's son, so I decided to take a shot at sending him a letter to see what kinds of stories and information he would be willing to share.  I was pleasantly surprised today when I came home to a large manila envelope full of documents about Eric McNair's playing career.  The above copies of McNair's signature and the vintage photos are all copies that Mr. McNair sent to me for my collection.  He also included a nice letter, which I will relay:

It was nice of you to write and inquire about Dad's MLB career.  Not many folks down home even know abt. him, as a MLB player.  Here in Deep South, football (College Style) Ole Miss, ALA., State, Sou. Miss is King of the Hill.

I was 11 years old and was a batboy for Savannah Indians baseball team, (1947) when he (Dad) had and untimely heart attack & passed away shortly thereafter.  He was back in baseball, after a 13-year playing career in MLB, as a Manager for Connie Mack's AA farm club, in Savannah, GA.  I think he would have eventually made it to Phil. A's as, a third base coach!

I remember some stories, and Foxx (old Double X) who chased The Babe's HR record was a good friend of Dad's.  I have enclosed some memorabilia, especially of J. Foxx for you to have as a keepsake.

I have a 1929 world series ring in a safe deposit box, plus a world series watch that I had restored and gave to my son Eric III for a past Christmas gift.

He could never afford college back then, his parents, Henry McNair and Nettie Roberts-McNair, was an irish immigrant's son and a hard working blue collar employee of Southern RR, In Meridian, MS.  A railroad center at the time!  Actually, Eric was only a rookie in 1930... just 21 years old.

The invite to Japan (1934) ALL AMERICAN TEAM... by the Japanese Imperial Gov't. & YOMARHARI NEWS FOR A MONTH TOUR OF JAPAN...IN NOVEMBER 1934.  Due to Japan's aggression towards China, the USA had a State Dept. ban on Americans going to Japan.  Special diplomatic approval had to be arranged.  Plus, a catcher, MOE Berg, was secretly commissioned by USA Central Intelligence Bureau, to be a Spy in Tokyo, of the Japanese warships in Tokyo Bay!  A book "the catcher was a spy," has been released several years ago!

...selected by Babe Ruth and Connie Mack [the 1934 all American Team] has been recently declared by Leland's Heritage Auction Houses as the greatest barnstorming team of the 20th century.  FOXX, RUTH, GEHRIG, the supreme HOME RUN HITTERS of that era were on [the] team.  Be that it may, ERIC MCNAIR was the invited SS on this team.

...many thanks for the heads up abt. the new release book on Foxx, I shall look it up on Amazon.

***I typed most of the letter as he had written it.

Below is a photo from the Japanese tour, with Eric McNair on the left, J. Quinn in the middle and Jimmie Foxx on the right. 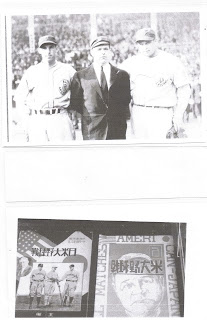 Above are some paraphernalia from the Japanese tour. 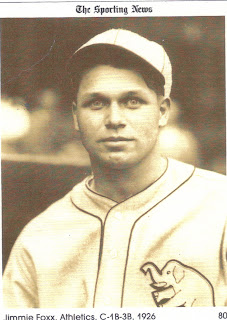 Above is a newspaper photo of Jimmie Foxx circa 1926.  I love the elephant on the jersey. 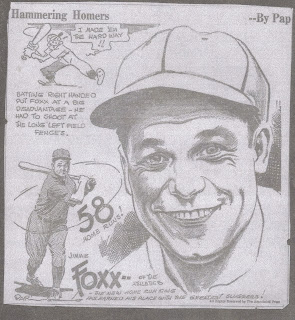 Here is a comic that Mr. McNair sent me about Foxx and his pursuit of The Babe's then home run record.

I thought it was really awesome to get all of this correspondence in the mail from Mr. McNair.  I'm sure he enjoys relating the stories he has of his father.  The 1930 A's had a bunch of Hall of Famers on that team.  Along with Foxx were also Lefty Grove, Al Simmons, Mickey Cochrane, Eddie Collins (for 3 games as a player and most of the season as a coach) and were managed by Connie Mack.

I appreciate Mr. McNair getting back to me and for my friend who turned me toward Mr. McNair for the information.
Posted by William Regenthal at 11:14 PM