Since I knew I would have to get up early Sunday to go to the race with my dad, I decided to head to my parents' house on Saturday.  I called up my little brother and asked him if he would want to go to a minor league game with me, he said he would, so I checked the schedule and saw that the Hickory Crawdads were playing at home on Saturday night.  Hickory is about an hour away from Mom and Dad's, so it was a pretty easy choice.  Plus, it helped me add a new minor league park to my list. 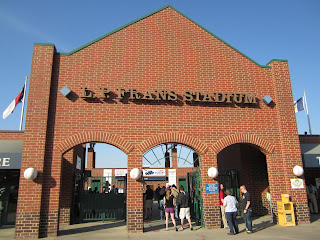 L. P. Frans Stadium is the home of the Crawdads, the A affiliate of the Texas Rangers.  I also got to meet my brother's girlfriend and invited her along at well. 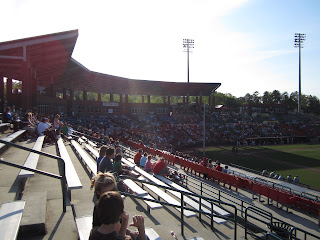 There weren't a lot of people there, even though they were giving away Eric Church bobbleheads.  We got there about 10 minutes before gametime, so we missed out on the bobbleheads.  Sorry Dodgerbobble. 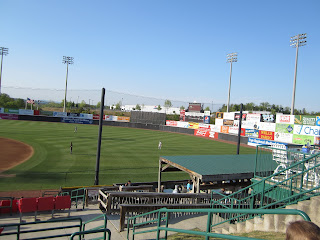 Hickory has a pretty nice field.  It reminded me of Bowie for some reason.  The backdrop was nice, save for the Pepsi warehouse behind the right field wall.  I bet it looks pretty out there in the fall when the leaves are changing. 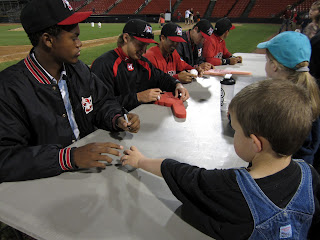 The Crawdads held an autograph session after the game, so I let Chris go down on the field so he could get the ball I bought him signed.  He got me a South Atlantic League ball from a little girl who caught a foul ball by trading one of the brand new Rawlings OLB balls that I had brought with me.  I guess she was looking for something prettier than the foul ball she caught.  Oh well, I thought it was a good trade! 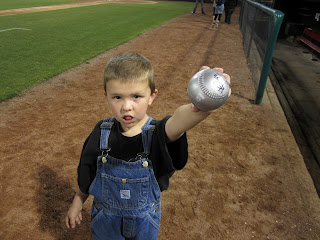 So, here is Chris with his signed baseball.  He did get some compliments on his awesome overalls, which makes him look so cute.  As far as my brother and his girlfriend, I took an embarrassing photo of my brother eating a hot dog, but I don't want to embarrass him more than I already have, so I will keep that picture to myself.  Maybe I'll publish it in his senior yearbook a few years from now....
Posted by William Regenthal at 7:35 AM

All this time Dad and I thought ya'll had gone to BB&T field! Good thing we didn't show up there looking for you.
You should post the photo of Andy.