I finally got a signed baseball that I have been wanting for a long time (since the first time I watched Ken Burns' "Baseball").  I picked up this Buck O'Neil signed baseball off of Ebay for $70.00.  It is PSA/DNA authenticated.  The free shipping was nice, too. 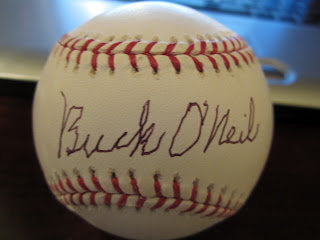 O'Neil was a former Negro Leaguer, coach and ambassador or baseball.  He was the first African-American coach in the majors.  He passed away at the age of 94 in 2006, not too long after he was denied entry into the Hall of Fame when a special committee was appointed to research and honor past Negro Leaguers who had been passed over.  The committee allowed for 17 former players to be inducted, but O'Neil wasn't one of them.  I think, given all that he contributed to the game, he should one day be enshrined in the Hall.  That is, of course, my opinion, but I doubt you will find too many people who would disagree.  Sometimes it is a lot more than sheer numbers that gets someone inducted, but the process is in place for a reason.

I'm really glad to add this ball to my collection as it is definitely one non-Hall of Famer that I really was looking to acquire.  As it stands, I have several signed baseballs from some prominent Negro Leaguers, including O'Neil, Buck Leonard, Monte Irvin, Ernie Banks and Hank Aaron.  I want to travel to Kansas City one day and visit their museum.
Posted by William Regenthal at 8:02 PM

AWESOME pick up! I agree with you on all points - Buck should be in the Hall if not for anything else for being THE best ambassador for the negro leagues in the modern era. The Kansas City Museum would be amazing to visit. Great post!