Some Christmas Packs of 2011 Topps Update

One of the Christmas presents my wife got me was a blaster box of 2011 Topps Update Series.  It was the Target exclusive version, so inside were two red variation packs (nothing really of note in them) as well as the Commemorative Logo Patch. 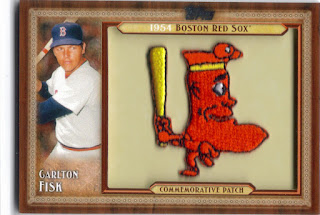 The logo patch I got was the above Carlton Fisk Red Sox patch.  It looks pretty cool, even thought I'm not a Red Sox fan. 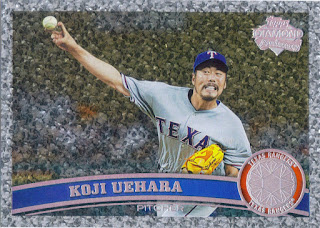 I got a Roberto Alomar cognac diamond parallel, but I already had it, but the above Koji Uehara diamond parallel was pretty nice.  Rumor has it that Texas is willing to trade Koji back to the Orioles since he really wants to be back in Baltimore.  I'd love to have him back. 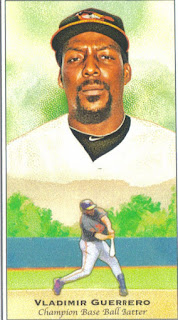 Finally, this mini Kimball Champions insert of Vlad Guerrero was also pretty cool.  I didn't think Vlad was a bad pickup for the O's this past season.  Even though, $8 million for a singles hitter is pretty high.  It would have been nice if Guerrero had hit for a bit more power.
Posted by William Regenthal at 5:21 PM

My son got the same exact Fisk manupatch. I was hoping Koji would like it here in Texas, but apparently he didn't make the transition well.