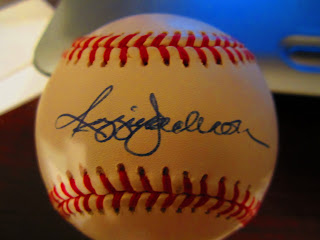 It is really hard to sell at a card show by yourself.  Having a partner helps tremendously, especially if you need to take a bathroom break.  This is why you won't see a 'Card Show Haul - Day 1' post on here.  It doesn't exist.

At the show on Friday, I was by myself at my tables so I wasn't able to take a look around at what the other guys had (which, I have learned, is a very effective way to save money).

Today, however, I had some help.  Ryan from O No Not Another Orioles Blog came down from the Richmond area to check out the Raleigh show.  I met Ryan at a show maybe 6 months ago and he is a really cool guy.  Luckily, this time, when we met up, the power didn't go out.

Anyway, before Ryan even got there, my son Chris and I walked around.  I was kind of scoping the place out before the show started to see if there was anything that caught my eye.  Something did, that's for sure.

I had seen Reggie's autograph numerous times and it definitely looked legit.  The catch?  The ball wasn't authenticated.  I spoke with the seller and he pretty much said he didn't feel like getting it authenticated, so he was going to let it go at that ridiculously low price.  He also told me that if it failed authentication, he would refund my money.  So, I bought the ball and walked it over to the JSA booth, filled out my form, paid my $20 authentication fee and an hour later?  I now have a JSA authenticated Reggie Jackson signed baseball.

Jackson is my 54th Hall of Fame signed baseball.  I'm hoping I can land maybe one more ball as the show winds down tomorrow.  We'll see.  Today definitely showed me that sometimes, not often, but sometimes when something looks too good to be true... it works out in my favor.
Posted by William Regenthal at 8:48 PM