Ok, I realized the other day as I was reading a book about baseball from the 1930s and 1940s, I am really starting to like and appreciate the Detroit Tigers.  No, I am not switching my allegiance from the Orioles to the Tigers.  I just like to read about the great players in Tigers' history.  You know, Virgil Trucks, of course, Hal Newhouser, Hank Greenberg, Ty Cobb, etc.

That being said, I received a TTM success from a former Tiger great when I got home from the show on Saturday, Lou Whitaker. 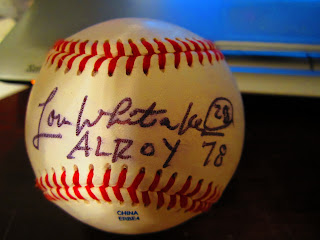 I mailed to Lou Whitaker on December 8, 2011 and received the ball back on December 17, 2011.  A TAT of 9 days.  Not bad at all.  One reason why it turned around so fast was because Lou Whitaker lives in Greensboro, NC.  I thought that was pretty cool.  He didn't charge a fee and inscribed the ball 2B and AL ROY 78.  It looks really awesome in person.

Whitaker is my 39th TTM success and my first since way back in November when I got 'Mule' Miles.

Awesome success. Lou is one of the best Tigers of all-time. Cool to know he's so generous with signing.

Now you need an Alan Tramell ball to go along with the Whitaker! Nice pick up!