Christmas Presents From Mom Part One

I hope everyone had a great and safe Christmas.

I'll start my Christmas posts off with some of the stuff I got from my mom.  I plan on breaking up what I got into several posts, so check back often to see what all was received.

First off, I got two more Ball of Fame boxes.  Mom was really hoping I would pull the Mickey Mantle, as she is a big Yankee fan.  I wasn't that lucky, but got two really good baseballs, one of which I already had, but it was still an upgrade over the one I already had. 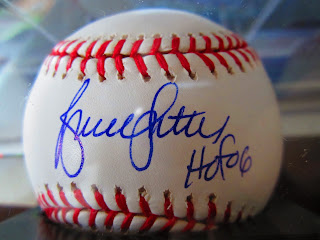 The first box I opened was Bruce Sutter.  I picked Sutter up last year, but this one is graded, so I consider it an upgrade.  I'll probably sell the other Sutter that I have.  If anyone is interested, let me know. 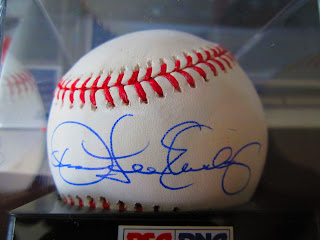 My other pull was a Hall of Famer who i didn't already have, so I was really happy.  It was also another 'full name' variation, so that made it even better.  I got Dennis Eckersley!  I have been wanting an Eck ball for a while, but have kept putting it off, so it is good to finally have him as my 58th Hall of Famer.

My mom always gets me awesome stuff, and there is a bit more to show!  Thanks again Mom!!!
Posted by William Regenthal at 10:10 AM