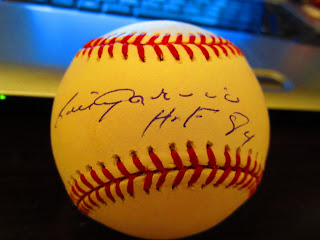 This is the only baseball that I bought straight up from anyone at this show.  I picked up 'Little Louie' from the same guy that I traded my Albert Pujols Stadium Club triple relic auto for my Bill Mazeroski and Don Drysdale balls.

I was able to get Aparicio for $40.  He is someone I have been wanting to get for a while now, since he was a former Oriole.