A Couple Pickups From The Card Show

I didn't buy a single card for myself at the card show.  I purchased a few cards for a friend of mine that I thought he would enjoy, however.  I figured I would post them because they aren't ones that would normally end up on this blog. 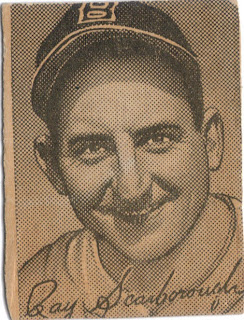 After his playing career was over, he retired to Mount Olive, NC (which is about an hour or so from where I now live) and opened an oil and supply company.  He also helped to establish the baseball program at Mount Olive College.

My friend knew Mr. Scarborough personally, so anytime I can find something of his, I try to pick it up.

Additionally, I just thought this card looked really cool, so, I think it will be a nice little something to send his way. 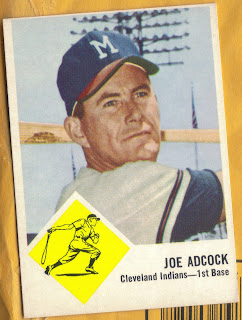 I'm also helping my friend work on the 1963 Fleer set and I was able to pick up the short printed Joe Adcock that he needed for his set.

The card is pretty sharp, even though I scanned it crooked.

I had never heard of Adcock, so a little checking on baseball-reference.com showed that he played in the majors from 1950 to 1966 for the Reds, Braves, Indians and Angels.  He was a pretty good power hitter, hitting 336 homers in his career with 1,832 hits and a .277 batting average. 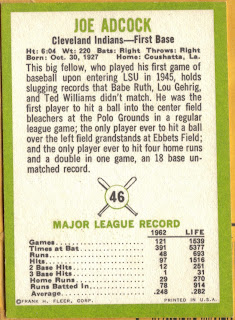 Sometimes it is far more fun to find stuff for others than it is for yourself, and this trip to the card show definitely showed that.  I also got to see some cards that I probably wouldn't have looked twice at otherwise.
Posted by William Regenthal at 5:50 PM

I've driven through Mt Olive a few times on my way to the beach for vacation. I had no idea that it was the place that all the pickles come from or that Scarborough was from there.

I like it there, a really nice town. Next time you drive through there, stop at a Friendly Mart gas station (any one of them) and get a hot dog. Those are some awesome hot dogs. Just sayin...