I have been saving money lately so that I can knock some more baseballs off of my want list. However, I have been so indecisive about what I wanted to buy that I have been racking up the savings.  I thought to myself that I could take what I've saved and get a big name like Mantle or DiMaggio; keep saving and try for a Dizzy Dean or Jimmie Foxx or spread it out to several hall of famers that I normally wouldn't be able to buy.

That's when I went on Ebay and started looking at all that I could get with what I had saved.  After days of looking at prices, I jumped on a Hall of Famer who was kind of on the tier as far as average price of a Mantle or DiMaggio.  Ok, well, maybe on the lower end. 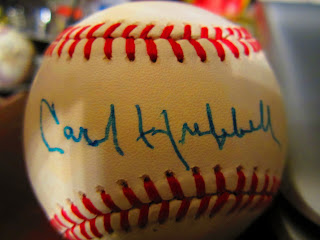 Anyway, I jumped all over this PSA authenticated Carl Hubbell.  After doing some research, I found that a signed ball of Hubbell went on average for around $300-$350, so when I saw the price this one was at, I had to grab it.  Let's just say, I got it for a decent bit less than the lower average price.

Hubbell is my 53rd Hall of Fame signed baseball and is definitely one of my more valuable ones (his and Ted Williams, I would rank as my top 2).  Charlie Gehringer is still my 'oldest', having a career that spanned from 1924 to 1942.  As far as actual player age, Gehringer beats Hubbell by a little over a month, having been born in May 1903 to Hubbell being born in June 1903.  Putting that into perspective, my great-grandparents were both born in 1901, only 2 years before Hubbell (and Gehringer) were born, and my Grandmother was born in 1927, only a year before Hubbell began playing in the Majors...

In 1934, Hubbell set an All Star game record by striking out 5 batters in a row (the record was later broken in 1984 when Fernando Valenzuela and Doc Gooden combined to strike out 6 batters).  Funny thing is, though, is that the 5 batters Hubbell struck out all ended up becoming Hall of Famers.  He struck out, in succession, Babe Ruth, Lou Gehrig, Jimmie Foxx, Al Simmons and Joe Cronin.
Posted by William Regenthal at 6:05 PM

Sweet pickup man! Maybe not an enormous name around baseball but seems underestimated after looking at his stats!