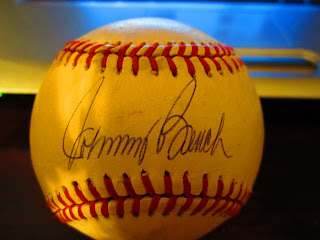 I scored big time today.  I also would like to mention that I did my 'scoring' today with minimal cash investment, which makes it that much more fun.

First off, today was a trying day at the card show.  Christopher forgot his 'listening' ears and was pushing my buttons all day long.  For some reason, a six-year old thinks the bathroom is a fun place and wanted to take a pee break seemingly every 5 minutes...  I think it was his way of saying "I'm bored, I want to walk around..."

Anyway, other than that, he did really well for a six-year old bored out of his freaking mind at the show.  Sundays are slow days, but I still was able to sell a couple things, and I was able to have a good talk with blog readers Robert and his dad.  Really nice folks who are from the area that I always enjoy talking with at the show(s).

Well, I didn't buy myself any cards at this show, but that was mainly due to not being able to spend more than a few minutes browsing around, however, including yesterday's Reggie Jackson, I am now 4 Hall of Fame baseballs richer....

I got the above Johnny Bench via a semi-trade with another dealer.  I saw the ball yesterday while I was walking around.  The guy wanted $50 for it (it is a really toned ball, but looks cool).  I waited around today to see if my TTM Doug Harvey ball would sell, but after a few people looked at me like I was crazy for saying "Yes, this UMPIRE is in the Hall...", I decided to see if the guy would trade for it.  I was told by the JSA guy in attendance (and I remembered from seeing a couple on Ebay) that a Harvey ball would sell for about $50.  The dealer said that he would do the trade if I threw in $20 extra in cash.  I figured that was fair enough, since Bench baseballs go from $65-80 online.  Plus, I really only paid about $30 for my Harvey ball when you factor in cost of the ball itself, postage for the TTM and the $20 authentication fee...

So, my 55th Hall of Fame signed baseball is that of Johnny Bench!  I could have gotten Bench TTM from his website, but swinging this trade was a lot more fun.  So, if you do the math correctly, I traded an umpire and cash considerations for a 14x All Star, 2x MVP catcher.

Stay tuned to see which were the final two baseballs that I was able to get.