We are moving right along. Here is former pitcher and pitching coach, Art Fowler. 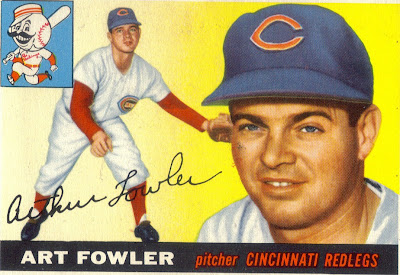 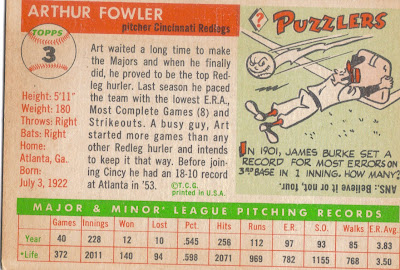 I have to be honest, I have never heard of Fowler. I was able to find some information, though. He was born in 1922 and died in 2007 and played from 1954-1957, 1959 and 1961-1964 for the Reds, Dodgers and Angels. He retired with a record of 54-51 and a career ERA of 4.03.
Something cool about this card, if you didn't notice already, the team name is depicted as 'The Redlegs.' McCarthyism, anyone? I think it is pretty interesting that a part of US history is inadvertently depicted on this card. For those of you who don't get the reference, the anti-communism movement of the 1950s (Red Scare) was at its height when this set was released. In order to circumvent any possible negativity, the Reds were called the Redlegs. Interesting, indeed.