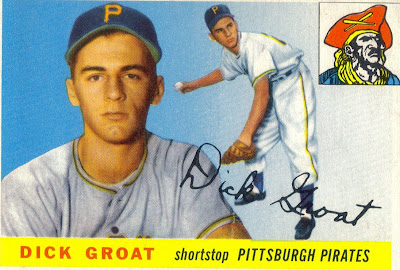 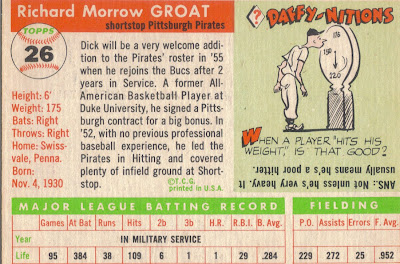 Dick Groat (b. 1930) was more than a solid baseball player. He was also a standout college basketball player for Duke University. During the 1951-1952 season, he scored 48 points against UNC, which remains the most points scored against the Tar Heels. His uniform number 10 was the first number to be retired by Duke and remained the only number retired by them until 1980. He was selected with the third overall pick in the 1952 NBA draft by the Fort Wayne Pistons. He only played one season in the NBA.
Groat, however, played in the majors from 1952 to 1967 for the Pirates, Cardinals, Phillies and Giants. He won the World Series in 1960 with the Pirates and in 1964 with the Cardinals. He was also the 1960 NL MVP. He was definitely a decent player, he ended his career with a .286 average and 2,138 hits.
Posted by William Regenthal at 12:00 PM