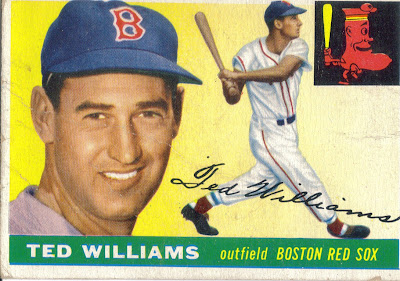 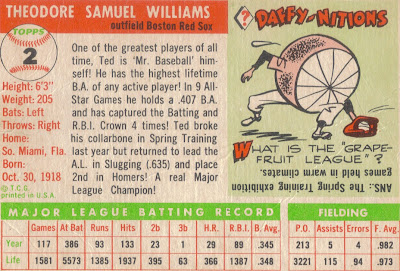 Isn't it amazing (just a bit) that Williams only had 1,937 hits and 366 home runs as of the time this card was printed? Williams is one of the biggest names in the set.
The reason the set is only 206 cards (and there are several notable onmissions) is because of the competition at the time between Bowman and Topps. Missing from the set are: Mickey Mantle, Whitey Ford, Stan Musial, Bob Feller, Roy Campanella and Don Newcombe.
Ted Williams (born 1918 - died 2002) is regarded as one of (if not THE) greatest hitters of all time. He finished his career with 2,654 hits, 521 home runs and a .344 career batting average. All of this while missing time while fighting in two different wars! He also served as a manager (our first future MLB manager!) for the Washington Senators/Texas Rangers from 1969-1972.
Williams' death was also quite controversial. I was vacationing in Catalina (trust me, I was lucky to be able to go on that trip) when I heard about his passing. Apparently, during his last few moments alive, he signed on a napkin that he wished to have his head cryogenically frozen upon his death. There was a huge issue between his children after his death due to the questionable nature of his 'final wishes.' Since then, it has been reported that his head was mishandled at the facility which housed it. Wow. I have nothing to add to that.
HALL OF FAME (1)
MANAGER (1)
DECEASED (2)
Posted by William Regenthal at 12:00 PM

Dang, that is one of the only Red Sox I will ever appreciate. Awesome, awesome card dude