Trying to Find Positives in a Sea of Negativity

The 2010 season is already a wash to me, only 18 games into it. The Orioles are inventing ways to lose. The past 2+ weeks have been beyond frustrating, especially because the Orioles were supposed to be closer to 0.500. Someone please tell them that they are going in reverse. It has been very hard for me to stay interested in blogging on a consistent basis with the epic downer that my team has created. I'm trying guys. Please bear with me.

There are a few positives to this season if you dig deep enough. As much as I like him, Dave Trembley will be gone soon. I now feel like he definitely is not the answer to the future of the club. Unfortunately, I have no idea who could take over during the season and cause a dramatic turnaround (Jim Tracy for the Rockies last year was an exception, not the rule).

There are some positives, however: The Oriole starters (which was a huge weakness last year) have been good enough to keep the games close.

Ty Wigginton has proven very useful given consisten playing time. He most likely will be moved by the trade deadline for more prospects. I'm ok with that.

The biggest positive from this season so far has been Brian Matusz. He will win more games than he will lose. He racks up Ks with great frequency. I still believe he will be a strong Rookie of the Year candidate, but he's going to have to get some run support.

So, that being said, I picked up something cool because of how good I think Matusz is going to be:

2008 Razor Lettermen Brian Matusz Auto, letter Z. #ed 5/20. Freaking sweet. I got this for a steal on Ebay and seriously think that its value will only increase. 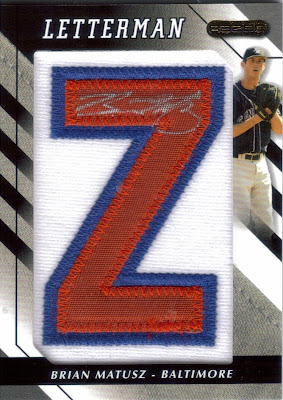 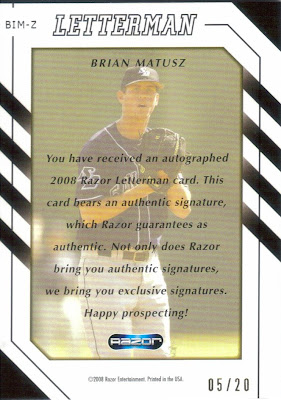 Happy prospecting. Yeah. With Matusz, it's going to be very happy, I think. He has been a ray of light in a dismal season so far. Yes, it will turn around before the season is over, but damn it has been hard to watch. I'm waiting for the O's to shoot off a 12-game winning streak or something like that to get them back on the right track.
Please make some bullpen changes so leads aren't coughed up in the 9th inning, though. I blame the bullpen for at least 6 of the losses. If the O's had a competent bunch of relievers, the season would be markedly different.

Thanks for putting up with my bitching guys. Hopefully I haven't pissed too many of you off :) I'll be ok sooner or later.
Posted by William Regenthal at 11:10 AM

I do have a Matusz Upper Deck 2010 card for you. Found it while I was going through my doubles.