My wife thought that we should surprise our son yesterday by taking him to Grainger Stadium for a game. He has been pretty good lately and did an awesome job during his first T-ball practice last week, so I thought it would be a good idea as well. It was also $2.00 Tuesdays so we definitely didn't mind making a night of it.


Yesterday was by far Chris' most productive trip to a baseball game, yet. We entered the park with three baseballs to get signed and left the stadium with 7 baseballs and a bat. Not a bad haul.

When we got to our seats, a ball was laying on the ground near the seats that must have been left over from batting practice. I, naturally, picked it up and put it in my glove. We took position by the visiting dugout and waited for the Hillcats to come out of the clubhouse.

When the players finally emerged, about half an hour before the game, several of them walked straight up to Chris and signed his baseball. He touched fists with the Hillcats right fielder Justin Reed after Reed signed his ball.

About halfway through the game, Reed caught the final out of the inning and tossed the ball to Chris (I went to catch it for him, it deflected off of my glove and hit me in the head... I never said I had any talent).

After one out in the bottom of the ninth inning, I took Chris to the visiting dugout again to watch the final two outs so he could see the players as they came off the field. The final two outs were made (the last one coming off of an amazing running catch by the Hillcats center fielder) and the players trotted off of the field. Chris asked an injured player who was charting pitches for a bat, but he told Chris that he didn't have a bat, then handed him a ball. The center fielder who caught the final out then tossed Chris that ball. Finally, the Hillcats right fielder, Josh Fellhauer, handed Chris his cracked bat. 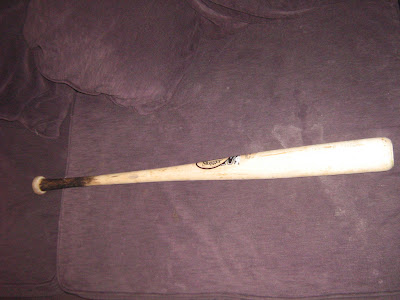 The bat has a hairline crack along the barrel. Fellhauer is ranked by Baseball America as the Reds' 26th best prospect this year, and has him projected to be a solid major league contributor in the future. I'll pick up a bat tube this weekend when I head to the card shop. 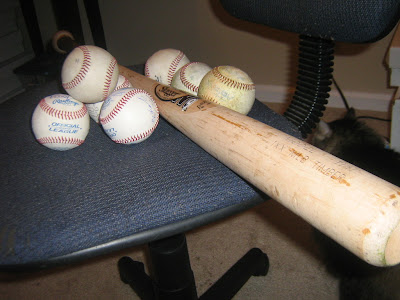 The upper left baseball is the ball from the game ending catch. The three balls behind the bat were either found at the stadium or thrown to us by players. The three underneath the game ball were the ones we brought in and had signed.
I was really happy that Chris was able to interact with the players and go home with some cool stuff. I'm ready to go back today.

Posted by William Regenthal at 5:35 PM