One of the coolest things I picked up on my vacation came as a complete surprise to me.  During my dinner with Mr. Don McNair, I was allowed to look at his scrapbook that he put together about his dad's career.  When I got to the portion that showed this rain check (which used to be attached to the actual ticket to the game, of course), he asked me if I was able to take it out of the album.  I said 'I think so', removed it, and he said 'good, take it home with you.' 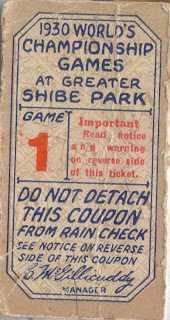 I'm still amazed at his generosity.  This piece of a World Series ticket is 82 years old and is definitely a part of history.  To have it in my possession is really awesome.  I saw whole tickets to later World Series at the National Card Show going for several hundred dollars.  This one is in rough shape and clearly isn't a whole ticket, but it it still amazing.  I also like that the ticket has the signature of C. McGillicuddy at the bottom.  Also known as Connie Mack.
Posted by William Regenthal at 10:06 AM

That is definitely pretty awesome!

Woah, that thing is sweet! I don't remember you telling me about that one.. what a generous guy!

That's a nice piece of history.