I still have a good bit of stuff to blog concerning my vacation and the National Card Show, but before I forget, I wanted to mention that I received two TTM successes while I was away.  Chris and I were at the Montgomery Biscuits game when my wife texted me that I had two of my mailers come in.  I told her to put them aside and I would open them when I got home. 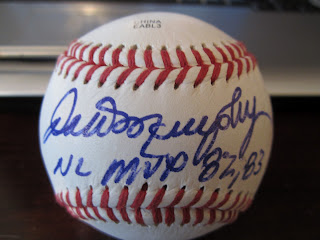 Murphy (b. 1956) played in the majors from 1976 to 1993 for the Braves, Phillies and Rockies.  He ended his career with 2,111 hits, 398 home runs and a .265 batting average.  The two-time NL MVP played on some BAD Braves teams back in the early 80s.  He has stayed on the HOF ballot for 14 years, never garnering more than 23.2% of the vote (of the 75% needed to gain election).  It definitely looks like Murphy will be on the outside looking in this year as well.  I think he will probably get in eventually, via the veterans committee.

Murphy is my 63rd TTM success.  Also, he did not charge a fee.  Stay tuned for the other TTM success and more from the National Card Show.
Posted by William Regenthal at 12:47 PM

Agree with you on Murphy getting in via the veterans committee. Nice signature - Happy for you!

I believe Dale is a HOF type of person, period. Congrats!