The 74th Hall of Famer in my collection, and the last one I picked up at the National Card Show was Don Sutton.  I got this ball, along with the Orlando Cepeda, for $50.  This one was originally priced $39, but after wheeling and dealing, I got them both for $25 a piece.  Not bad at all. 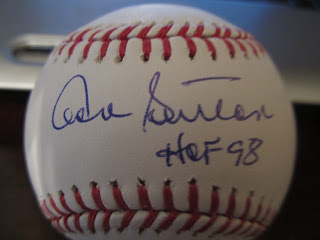 Stay tuned for a look at the non-HOFer baseballs I picked up at the show.
Posted by William Regenthal at 6:24 PM