We went to Oriole Park at Camden Yards today for the first time since 2010.  If you remember, I skipped my annual trip to Baltimore last year to go to the Baseball Hall of Fame.  I made it back this year and had a blast.  I did my third ballpark tour, but this time I was able to see the new statues that have been unveiled (Frank Robinson, Jim Palmer and Earl Weaver). 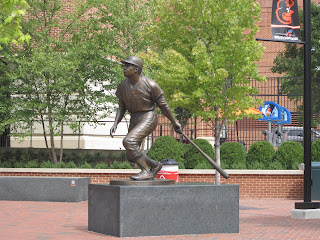 Here is Frank's statue.  It looks really cool.  I wish the Brooks statue had been unveiled, but it has been pushed back to September because he had been sick at the time. 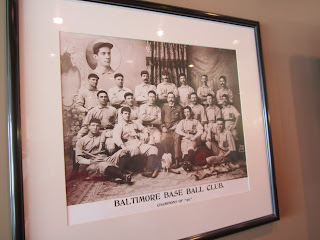 We enjoyed the tour, as always.  They took us into a luxury suite this time that had photos on the wall of the historic Baltimore Orioles of the American Association. 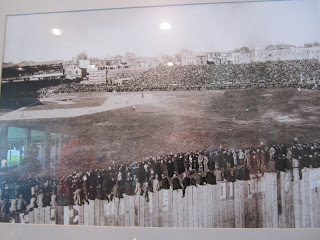 They also had this photo of the old Baltimore field.  I love photos of old ballparks.  I need to find one of these to hang up in the man cave. 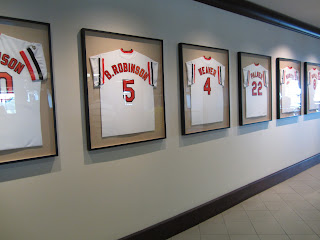 One thing I like about the tour is that I get to see the Orioles awards, such as the World Series trophies from 1970 and 1983. 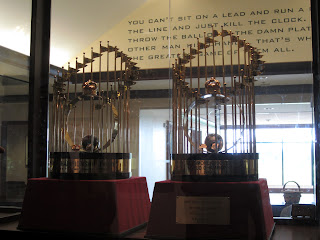 Here is one of Brooks Robinson's 16 Gold Glove awards below. 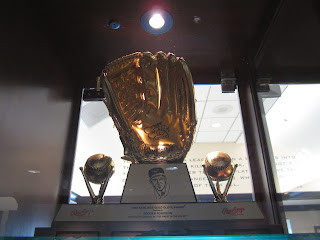 Now, you can see the Orioles Cy Young Awards.  These are copies of the ones given to Mike Cuellar, Jim Palmer (3 of them), Mike Flanagan and Steve Stone. 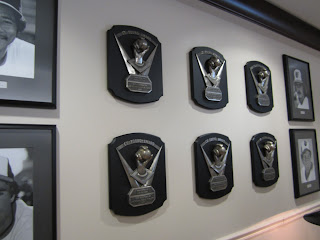 Below are copies of the 5 MVP awards won by Orioles Brooks Robinson, Frank Robinson, Boog Powell and Cal Ripken (2). 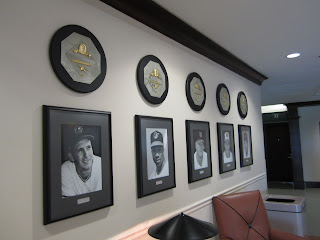 I was able to see Roch Kubatko's seat in the press box during the tour. 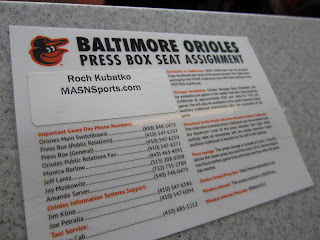 This time during the tour, I was able to get down on the field, so Chris and I posed for a picture.  We also got to sit in the dugout, which was really cool.  I don't remember being able to go down there before during the tour. 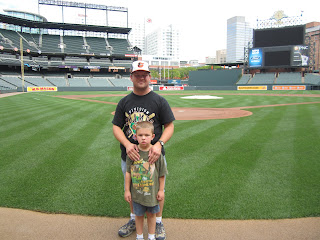 Here is a really cool shot of the Warehouse right before the game.  I set my camera to 'Sepia' and took the picture.  I might make a copy of this and hang it in the man cave.  I think it'll look really good on the wall. 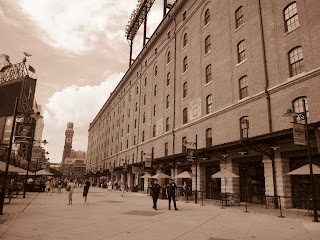 We were in the upper deck for the game, so my pictures taken up there weren't all that great.  We got to see Chris Tillman throw a really good game against the Mariners.  The Orioles won 3-1, behind the great pitching of Tillman and a 2-run home run by Nick Markakis. 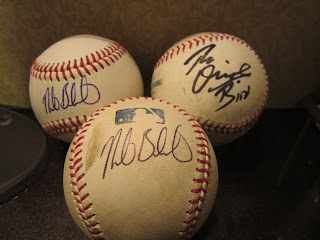 Chris got the Oriole Bird to sign one of his baseballs (a ball he got after the guy shagging around first base during batting practice for the Mariners missed a catch) before the game.  After the game, he and I got Mike Bordick while my wife got Casper Wells.  She tried to get Jesus Montero's autograph while waiting with several other folks but he wouldn't sign for her.  He signed for all the guys toting binders full of cards, but wouldn't sign for her because she had a pad of paper that she has carried around for autographs since she was a teenager.  He told her that he doesn't sign pieces of paper.  She was pretty upset at that, especially since he signed for the guys who were clearly going to put his auto on Ebay.  I felt bad for her, but I told her I wouldn't let it bother me too much.  She just won't be a Montero fan.  She has liked the Mariners since they signed Ichiro.  It looks like she will be a Casper Wells fan now.

One thing I also wanted to mention was that we got the crab cakes in the park and they were just phenominal.  If you go to an O's game, make sure you try one.  The are priced a little high, but well worth it.  We also tried a Natty Boh (Natural Bohemian beer) and it was really good.

So, we had a great time, regardless of Montero's inexplicable fear of paper.  I'm glad the O's got a win, let's hope they can keep it up.
Posted by William Regenthal at 12:25 AM