The View From the National 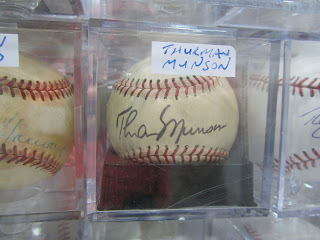 Greetings from a hotel room in Baltimore, Maryland as I rest my feet from standing all day looking through cards at the National Card show.  This is my first National and I have to tell you that it is amazing.  I was overwhelmed with all of the stuff to look at, all of the card tables, all of the memorabilia.  There is a lot of sick memorabilia.  By sick I mean, it makes me sick to think that someone is lucky enough to own some of the treasures that I have seen today.  See the above Thurman Munson. 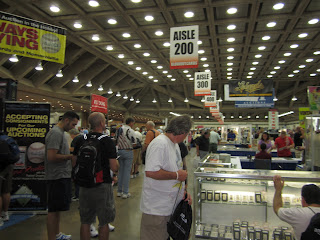 Take a look at the stuff we saw right when we walked in this morning.  There is no good way to tackle the amount of tables and boxes of cards.  You just kind of have to walk around and pray that you find what you're looking for. 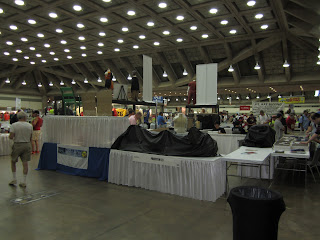 Take a look below at some of the amazing autos I saw, like the finest known Jimmie Foxx autograph.  Jeez that thing is amazing, isn't it? 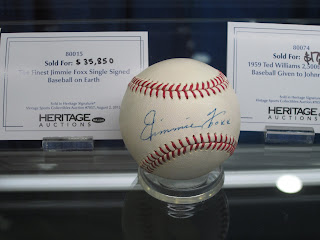 Or how about this Babe Ruth?  From his last public signing.  Crazy! 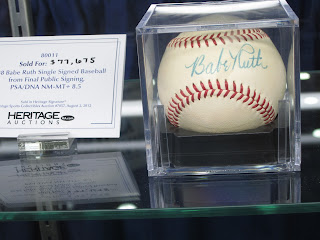 All of the corporate brands are there.  Topps, Panini, Ebay, COMC, Blowout Cards, PSA, JSA, etc etc.  Something I found funny was that the Topps booth was packed but Upper Deck only had a couple people milling about.  Looks like they are just about done. 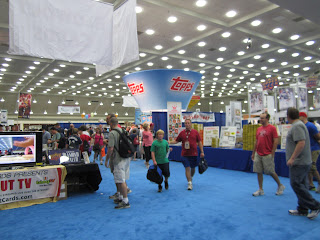 You have to keep your eyes open at the National.  I was chatting with my wife (who came willingly, mind you) and an old man walked by and patted Christopher on the head.  I turned and looked and it was only Tommy Lasorda.  No big deal.......  HOLY CRAP! 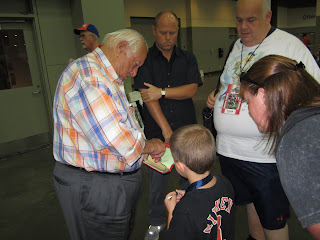 So, Chris took my wife's autograph pad and got it signed be Mr. Lasorda.  He was actually really nice.  I have heard so many horror stories about him at signings, so we were really pleased that he signed for Chris. 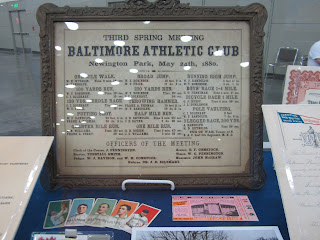 Since the show is in Baltimore, they had some memorabilia concerning the ball clubs founded there.  I like seeing all of that old stuff. 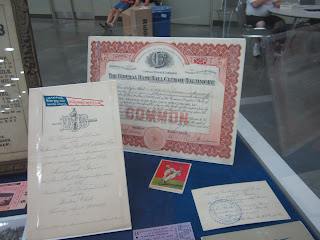 Got several thousand bucks burning a hole in your pocket?  Well, you can take care of that by buying one of these Mickey Mantles.  Mmm, 1952 Topps Mantle.  Very awesome. 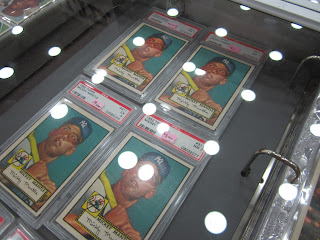 While I was chatting with one of the ladies from the AAGPBL, Joe Christopher, formerly of the Pirates, signed autos for some folks who bought a good amount of stuff from their booth. 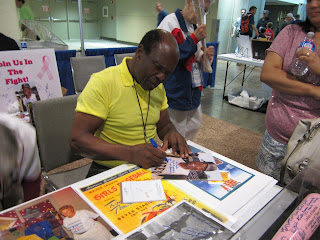 While I was waiting my whole 2 minutes in line for Jim Rice (more on that later), I caught a glimpse of Hall of Famer and Oriole great Eddie Murray. 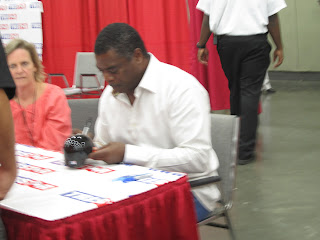 Chris and I met and got autos from Hall of Famer Jim Rice.  I'd like to say that he was nice (I mean he was) but we really didn't interact much.  At least he smiled in the picture.  We moved through the line so quick, there really wasn't much time for anything more than "Thanks Mr. Rice."  He thanked us as well and we were on our way. 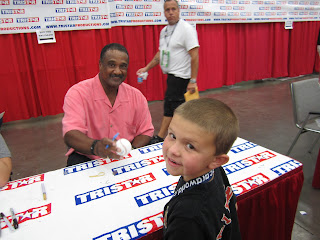 I'm completely enjoying myself, but I do have a couple issues.  We bought autograph tickets for Frank Robinson and Ralph Kiner and both of them canceled!  Both are having health problems, which is a shame, but Ryan and I checked the Tristar website last night and didn't see info on their cancellations.  Oh well, the folks at Tristar were really accommodating and allowed us to exchange for equal value tickets so we swapped for Jim Rice and Joe Morgan.

The other thing is that it is so hard to find what you are looking for.  There is just so much stuff to look at and take in, you really can't do it in one day.  I'm glad I gave myself two days.  I have had no luck finding my 2009 Topps Brooks Robinson letter patches.  I did, however, find some cards for several other bloggers.

I went to the show with Ryan from O No Another Orioles blog and met Julie from Things are Funner Here.  Always nice to meet some fellow bloggers in person.  I've known Ryan for quite a while now and stayed at his place last night.  He and I stayed up til 12AM looking at O's cards.

Tomorrow, I plan on getting my Joe Morgan auto and maybe pick up one or two more HOF autos that I have seen around.  I also want to see if I can find some Nolan Reimold inserts so I can try to complete some more Reimold rainbows.  Maybe I'll find some cool stuff among the boxes and tables.  You never know.
Posted by William Regenthal at 9:15 PM

Great to meet you today! That is an awesome Tommy Lasorda story and picture!

I also saw Tommy Lasorda on the floor, although I was too stunned to do anything but stand there and look bewildered.

I posted about it on my blog, if you're interested...
http://shlabotnikreport.wordpress.com/2012/08/05/celebrity-sightings-and-other-random-national-notes/