Hidden Treasures in Mississippi Part 3 - Trip to Japan and Autographs

One of the coolest things Mr. McNair showed me was in a briefcase he brought with him to dinner.  Inside the briefcase was an album that was given to Eric McNair when he was a member of the 1934 barnstorming team that toured Japan right before World War II. 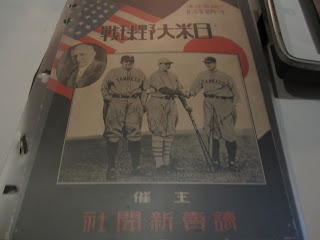 The team featured players such as Babe Ruth, Lou Gehrig, Jimmie Foxx, Lefty O'Doul, Earl Averill, Eric McNair and were managed by the legendary Connie Mack.  One of the players, catcher Moe Berg, was even spying on the Japanese for the US government.  This story was featured in the book The Catcher Was a Spy. 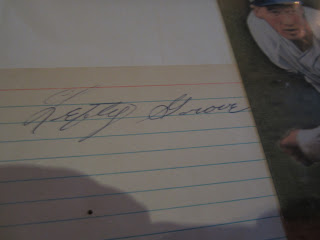 Also in the album was some other autographs, one of which was this index card of Hall of Famer, Lefty Grove.  The coolest thing in the briefcase, though, was this framed paper signed by members of the 1934 barnstorming team.  Click on the photo if you can see the signatures, but Ruth, Mack, Foxx, Gehrig are all clear and legible.  All of these autographs are real, no copies here! 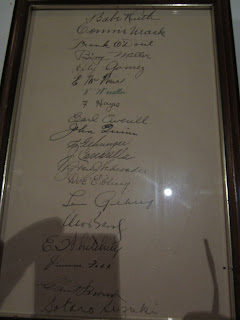 Pretty darn amazing, if you ask me.  Below is a photo of the team and Mr. Mack.  Lots of great players on that team.  I plan on reading the book about Moe Berg after I finish Eight Men Out. 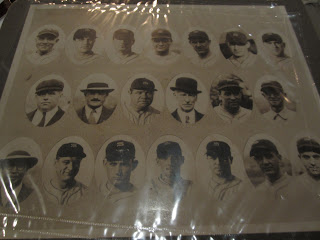 So, these posts have been the highlights of my meeting with Mr. Don McNair, son of former big leaguer Eric McNair.  I met up with Mr. McNair's son Eric, III (grandson of Eric McNair) the next day for lunch.  He is also a really nice guy who turned me toward something really cool while I was in Birmingham, AL, so look for a post on that coming soon!
Posted by William Regenthal at 11:42 PM