I'm fairly certain I picked up this Nick Markakis 2007 UD Exquisite Rookie Signatures card for $30 from my LCS.  Fairly certain.  To be honest, with as busy as I have been lately, I could have gotten this from anyone.  I think the proprietor of my LCS had it waiting on me when I went back in there after my vacation.  The card is numbered 10/20 and has a sticker auto. 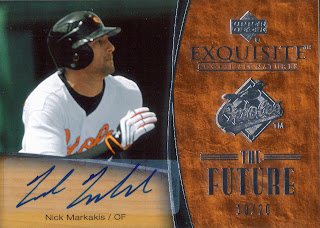 That being said, though, it is a really awesome card.  Nick the Stick is having a really good year for the O's after coming off of the disabled list and being thrust into the leadoff spot since there really weren't too many options after Nolan Reimold and Brian Roberts went down with injuries.

Markakis is a steady hitter, he won't wow you with home run numbers, even though many people predicted he would be a 25-30 homer threat.  He's good for 15-18 homers, 175-185 hits and a .280-.290 batting average.  Most times, when healthy, he can also be counted on for 40+ doubles.  Not to mention his cannon for an arm.  He is one of the better right fielders in the game and finally won a long overdue Gold Glove for his efforts.

Let's hope Nick can continue to show his stuff long into October.  Yes, Orioles fans are beginning to talk and think about October baseball.

Posted by William Regenthal at 7:34 PM