So, I bit the bullet and decided to buy a box of 2012 Topps Chrome last week at my LCS.  I figured that it would be a fun break and I may get a couple decent autos, as well as some of the different refractors. 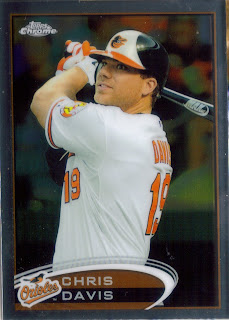 There aren't a whole lot of Orioles in this year's Chrome, but one I pulled was Chris Davis.  He is quickly becoming one of my favorite players, so I was glad to get this card.  Would have been nice to get a parallel of him, but that might be something I end up pursuing soon, just for the fun of it. 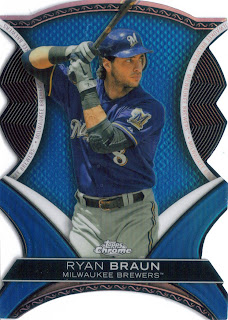 I got this nice Ryan Braun die cut.  This card will likely be up for trade.  I don't have a Braun PC.  I think he is a really good player, but I just don't see myself holding on to this for much longer.  If interested, shoot me an email.  Oh yeah, a bunch of you guys commented way back when I posted Topps Series 2 that there was interest in the inserts and parallels, yet no one has emailed me.  If you are interested, send me an email.  I don't bite... hard. 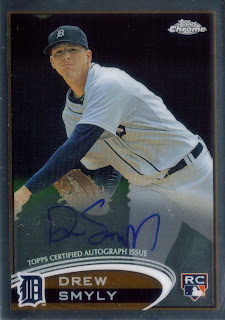 This Drew Smyly auto is actually the second auto I pulled, but for some reason it posted first and I'm too lazy to move them around.  You'll be ok.  This card is already spoken for.  Dustin will get this one soon, once he comes up with some Orioles that I need.  No rush, Dustin. 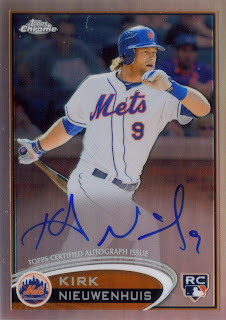 I also pulled this Kirk Neuwen... Niewen... Nieuwenhuis, yeah that guy, auto.  He was on my fantasy team for a good bit of the year and did ok.  I'm not a Met fan, so this one will also either be traded or sold.  I'd prefer sold, unless someone has something nice that they would send.  Again, send me an email and let me know. 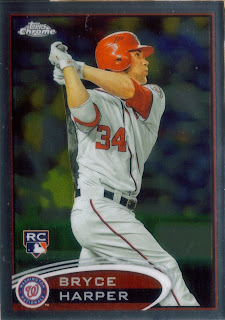 Oh look, its a Bryce Harper RC.  Nice, I don't have to get one off of ebay.  Is this one for trade or sale, you ask?  That's a clown question, Bro. 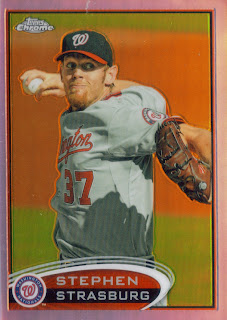 Awesome, a Stephen Strasburg refractor.  I enjoyed this card for about 160-180 innings before I was told by the higher ups that I had to shut it down.  Also not for trade, sorry. 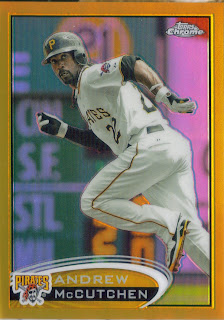 AWESOME!  I got the gold parallel, numbered 8/50 of Andrew McCutchen, my new PC.  I was REALLY happy to add this card to my collection!  I will probably look for the McCutchen Rainbow out of this year's Chrome.  If you want to trade me one of the other colors, EMAIL me and we can work something out!  McCutchen is a great ball player and should be the NL MVP, even though he has cooled off lately.  I mean, he has carried the Pirates all season, so I imagine he is exhausted. 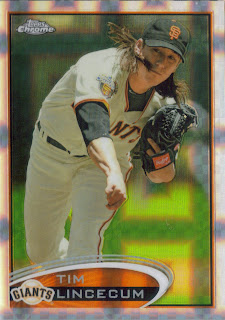 Finally, another card that has been spoken for.  I traded this card for a Wei-Yin Chen base Chrome.  Did I overpay, you ask?  Well, since I bought the pack of cards that the Chen came from and still had to trade to get it back, you might think yes, but since it will be going to my son, Chris, I don't think it is too much trouble to swing a trade with him.  Especially since this Lincecum is going in a top loader and being put in my box for safekeeping anyway.

So, in all, I was really satisfied with this year's Topps Chrome.  They weren't warped like 2010's and I actually pulled two different colored parallels out of one box (unlike NONE from maybe 5 boxes of 2010).  2010 really soured me on Chrome, even though that is the only Chrome set I have built.  I may actually attempt to build this Chrome set.  If anyone has any duplicate base cards they want to unload, let me know.  I might be interested.
Posted by William Regenthal at 6:43 PM

I would be most interested in that kirk auto...I'll send ya an email soon.

Helo. I started to write a new blog. Blog is about everything (traveling, pictures, music, fashion etc). My lifestyle. would be nice if you'd visit me sometimes. You can clikc on LIKE IT on the right column.
Thanks so much :)
www.heavysecret.blogspot.com

I know you're pretty stoked about the McCutchen. I can 't wait to check out the new blog by "Dawid Del" that posted in the comments above. Sounds like I might get an STD just by visiting it!

I cracked a case of chrome last weekend, shoot me over some of your needs and i'll see what i can do brauer144 at gmail dot com