Some More Stuff From Mr. McNair

I still haven't shown off everything I got from my vacation and from the National Card Show, which is amazing to me.  When Chris and I left our dinner meeting with Mr. Don McNair, Chris was given a 'grab bag' from Mr. McNair and was told not to open it until we got back to our hotel.  We were also told that there were a few things in there for me, and a few things in there for Chris.  Chris was told specifically that there was a baseball card in there for him and that I would be able to figure out what was mine. 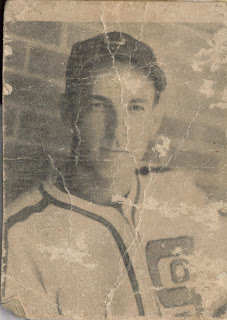 This 1939 Play Ball Eric McNair was the card for Chris.  This is now Chris' oldest baseball card, by far and will be kept in my safe until he is older and can take care of it.  The card is in rough shape, but this is definitely one of those moments when 'Mint' is not necessary.  The card has definite character.  I will pick up a EX-NM version of the card at some point (yes, I will have an Eric McNair PC). 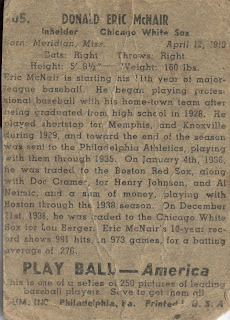 You should be able to click on the picture and read the back of the card.  This card is from 1939, of course, and by then, McNair had been in the majors for 10 years and had a World Series ring from 1930 after seeing only 4 games of action in the 1929 season.  He had been on the legendary Phillies teams of 1929 through 1931 and then had seen the dynasty dismantled by Connie Mack.  He worked through a few lean seasons with the A's then was moved to the Red Sox and was reunited with his good friend, Jimmie Foxx.  When the above card was printed, McNair was beginning his first season in Chicago after being traded there by Boston for Boze Berger.  It is kind of interesting to see how certain players ended up with certain teams. 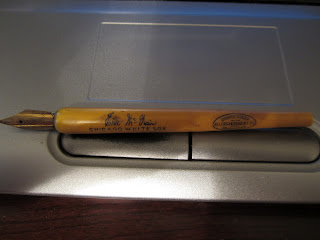 Something really cool that was in the grab bag was this old Eric McNair fountain pen.  I used to have a couple fountain pens when I was in high school.  I used them for some pen and ink work in art class.  I was actually really good at it (I'm sure you didn't know that).  Seeing this pen brought back some good memories.  I probably should get back into doing a little art work here and there.  Who knows. 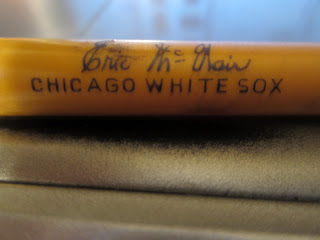 Anyway, the Eric McNair fountain pen was really cool.  When I met with Mr. McNair's son, Eric, III, the next day, I told him about the grab bag.  He laughed and explained to me that this was something his dad has been doing for his daughters their entire lives.  Every time they visit Mr. McNair's house, he gives them grab bags full of random items that he picked up from around his house.  This was so funny to me because it explained the eclectic mix of stuff that was in the bag.  Along with the above items, there was also a turkey feather, a book for Chris, a shirt for me, photos of Mr. McNair and his family and a check-in ticket from a local jewelry store (???).

This also reminded me of something I and my brothers used to do for each other's birthdays.  We would take an old toy out of the toy box and wrap it up or get a couple popsicle sticks and wrap them up.  You know, random stuff.  Eric, III told me that it was something unexpected that his dad did for the kids and it speaks to his dad's sometimes eccentric personality.  I definitely enjoyed that about him.

Don McNair accepted Chris and I as if we were members of his own family and I appreciated it greatly.  I hope he enjoyed our dinner as much as I did.  I really hope I can get back to Meridian, Mississippi and see him again soon.  Thanks Mr. McNair!
Posted by William Regenthal at 7:42 PM